Tux-Wearing Girl Who Was Kicked Out of Her Own Prom Gets Invited to Appear on It’s Always Sunny May 17, 2016 Hemant Mehta

Here’s a happy update to a story I posted last week.

Remember Aniya Wolf, the student who was hoping to enjoy her senior prom at Bishop McDevitt High School in Harrisburg, Pennsylvania, only to be kicked out because she chose to wear a tuxedo? 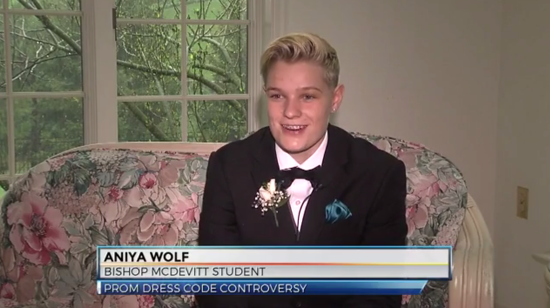 While her school hasn’t changed its policy, Rob McElhenney, who created and stars in It’s Always Sunny in Philadelphia reached out to Aniya and asked her to appear in the show:

Aniya, I love your suit. Would u like to wear it on Sunny? https://t.co/jn01iLrZVe via abc27News

You are kidding right?? https://t.co/Vbn8GHJbTA

@AniyaWolf @abc27News I am not. We'll be in Philly the last week of June. We need a little extra style and class. Can you help us?

It doesn’t erase the bigotry at the school, but it might at least make up for a shitty prom night.

(via The Mary Sue. Thanks to Brian for the link)

May 17, 2016 Jesus, Galled, Issues Trans Bathroom Commandment: "Poop and Get Out, Weirdos!"
Browse Our Archives
What Are Your Thoughts?leave a comment