Over the weekend, at the Northeast Conference on Science and Skepticism (NECSS) conference in New York, science journalist John Horgan gave a talk in which he asked skeptics to look beyond their traditional targets: 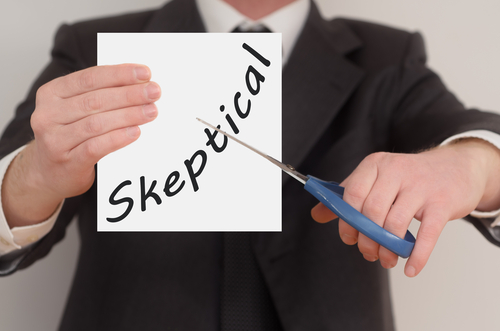 “The Science Delusion” is common among Capital-S Skeptics. You don’t apply your skepticism equally. You are extremely critical of belief in God, ghosts, heaven, ESP, astrology, homeopathy and Bigfoot. You also attack disbelief in global warming, vaccines and genetically modified food.

These beliefs and disbeliefs deserve criticism, but they are what I call “soft targets.” That’s because, for the most part, you’re bashing people outside your tribe, who ignore you. You end up preaching to the converted.

Meanwhile, you neglect what I call hard targets. These are dubious and even harmful claims promoted by major scientists and institutions…

His hard targets include “multiverses, cancer tests, psychiatric drugs and war, the hardest target of all.”

I’m not opposed to fighting against bullshit in all its forms, including faulty reasoning that leads us to war or sham treatments. But his whole argument seems to boil down to, “I don’t like your priorities; follow mine instead.”

You can’t solve every problem in the world. We should consider ourselves lucky that people are willing to dedicate their lives to fighting whatever injustices they see, even if it’s not your personal pet project.

We may not be able to solve the problem of war — but we might be able to convince people not to give their money to a self-proclaimed “psychic.”

We may not know enough to criticize string theory — but we can proudly debunk the lies conservative Christians spread about LGBT people. (And science. And sex. And God.)

We may not care about “gene-whiz science” — but we’re passionate about our atheism and we’re damn good at responding to Christian apologists.

And by the way — the people who criticize these “soft targets” aren’t necessarily silent about bad science and our country’s involvement in multiple wars. They can criticize President Obama‘s use of drones just as they can down a bottle of homeopathic sleeping pills in a protest that will get the attention of the media. It’s not one or the other. It’s a matter of what you’re passionate about.

Religion and pseudoscience and the afterlife are by no means “soft” targets — and damn near every skeptic I know who speaks about these topics publicly has helped people outside our “tribe” change their minds. We’re not just living in an echo chamber. We’re making a difference.

We’re helping people ask better questions, and challenge conventional wisdom, and think more rationally, and all of these things will help our society tackle the larger issues that no one group can ever solve.

The problem isn’t that skeptics are tackling small issues.

The problem is that most people don’t care enough to tackle any issues.

May 17, 2016
Dutch Reporter Kicked Out of Jehovah's Witnesses Convention After Asking About Homosexuality
Next Post