According to the satirical website Political Garbage Chute, God’s Only Son gave a press conference over the weekend, clarifying the heavenly stance on bathrooms for trans people, and issuing an 11th Commandment that will be faxed “to all Christian churches in the U.S. by the end of the summer.”

“We were hoping that it wouldn’t come to this,” Christ said, “but watching our people get so heated and angry over transgender people’s bathroom choice just made us too apoplectic to do nothing this time. So we’re unveiling, for the first time in a long, long, long time, a new commandment. Number 11. Thou shalt just poop and get out, weirdos.” 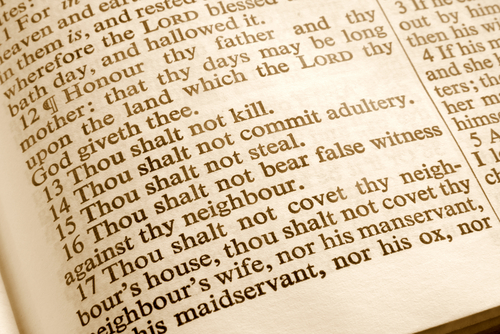 Jesus said that he can’t understand why humans are so concerned about transgender people using whichever bathroom they see fit because “they already prosecute and punish sexual offenders” so “conservatives are just being extra dicky to them.”

“And being extra dicky to people just because you’re judgmental of them is kinda exactly what I died on that fucking cross for, people,” Christ said, “so that you’d all stop that and focus on way more important things.”

And the Savior wasn’t done yet.

“The bottom line,” Christ said, “is that I love all the little children of the world. The lyrics don’t go, ‘all the children of the world, unless they identify as a different gender than the sex organs they were born with.’ So shut up, and go work at a soup kitchen, ya knuckleheads, and stop worrying about things that don’t matter.

Jesus took no questions, leaving while reporters still loudly demanded to know why He let five-year-old Chad die of a brain tumor despite tens of thousands of Facebook prayers, and keeping mum on the subject of the more than eight million people who, since the year 1900 alone, were wiped out in His angry Father’s “natural disasters.”

May 17, 2016
Tux-Wearing Girl Who Was Kicked Out of Her Own Prom Gets Invited to Appear on It's Always Sunny
Next Post

May 18, 2016 Florida Mother Finds God in Her Newborn Baby's Soiled Diaper
Browse Our Archives
What Are Your Thoughts?leave a comment