J.K. Rowling on Her Protesters: I Didn’t Know “I’m Praying for You” Could Be So Intimidating May 17, 2016 Hemant Mehta

J.K. Rowling on Her Protesters: I Didn’t Know “I’m Praying for You” Could Be So Intimidating

In a speech at the PEN America gala last night, author of the Harry Potter series J.K. Rowling gave a wonderful talk about the freedom of speech.

While most of the media attention has centered around what she said about Donald Trump — she called him “offensive and bigoted” — I wanted to note something else she mentioned.

After acknowledging that her own freedom of expression hasn’t suffered much during her career because she was fortunate enough to live in a liberal country, she told some brief stories about people who opposed her work, including one “Christian fundamentalist”: 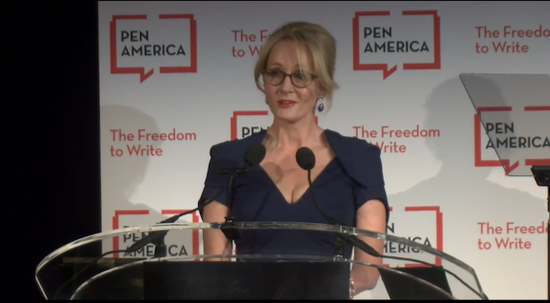 I was once confronted by a Christian fundamentalist in a toy shop here in New York. I had no idea the phrase, “I’m praying for you” could sound so intimidating.

We’re all heard that phrase before, in that tone. It’s rarely said with love. It’s usually said in the condescending manner of someone who assumes she knows more than you.

Rowling also noted how her novels had appeared on Banned Books lists, which flattered her because those lists inevitably included some of her favorite authors.

The point of her remarks was to say that freedom of speech means accepting the speech of those with whom we vehemently disagree. That means allowing Trump to enter the U.K., despite what one popular petition wanted, and it means letting people criticize the works of the authors in that room:

My critics are at liberty to claim that I am trying to convert children to Satanism, and I am free to explain that I’m exploring human nature and morality.

… Or to say “You’re an idiot,” depending on which side of the bed I got out of that day.

She forgot to say that reacting in any way is considered a form of Christian Persecution.

May 17, 2016
A New Russian Film, Debuting at Cannes, Centers Around a Bible-Obsessed High School Student
Next Post