Dutch Reporter Kicked Out of Jehovah’s Witnesses Convention After Asking About Homosexuality May 17, 2016 Hemant Mehta

The Jehovah’s Witnesses have received a lot of well-deserved criticism after releasing a video (aimed at children) in which a little girl is told by her mother that homosexuality is wrong.

The video prompted a Dutch journalist for PowNed to attend a JW convention in town and ask leaders there for their opinions on homosexuality.

Once they realized he was making them look bad, the organizers kicked him out for “generating turmoil.” Lloyd Evans has the video (with English subtitles): 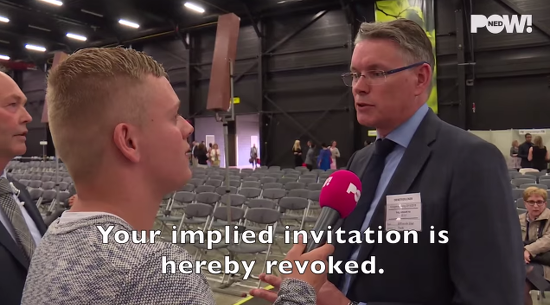 I guess for Jehovah’s Witnesses, the only thing worse than being gay is asking them about their stance on being gay.

May 17, 2016
What Do You Do When Your Old Friend Is Now a Christian Who Screampreaches Inside Target Stores?
Next Post

May 17, 2016 Skeptics Conference Speaker Criticizes Audience for Going After "Soft" Targets Like Bigfoot and God
Browse Our Archives
What Are Your Thoughts?leave a comment