One of the films making a splash at the Cannes Film Festival right now is a Russian-language movie by director Kirill Serebrennikov. The Student is all about a boy whose literal interpretation of the Bible makes him incapable of functioning like a normal teenager at his public school. His administrators eventually adopt his ideology, even encouraging the teaching of Creationism alongside evolution, but an atheist biology teacher soon begins pushing back.

In the clip below, the main character Venya tries to avert his gaze from the girl in his swimming class to the Bible (where it belongs): 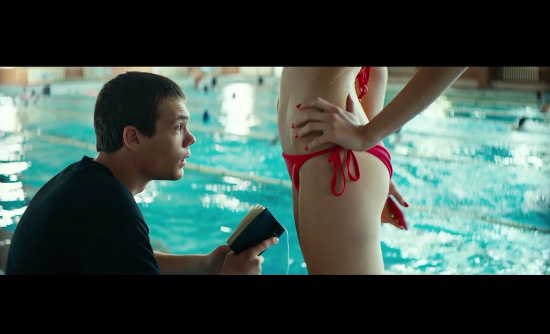 The director explained what his protagonist is going through:

For this teenage boy, it’s, of course, a testosterone explosion, and the girls don’t pay attention to him and he has a crisis in his family, no father, mother is stupid. Nobody understands him and he has to do something with his ego, to show himself to the world, “Here I am.” It’s a problem and it [evolves into] violence, into catastrophe.

Guy Lodge at Variety offers a bit more context into how this film fits into Russian society:

Three years ago, Russian president Vladimir Putin passed a bill enforcing mandatory religious education in all state schools — permitting students and their parents a choice between six religious disciplines, the dominant ideology of Orthodox Christianity chief among them. It was a motion that stood somewhat in conflict with the official separation of church and state, placing clear emphasis on how far modern Russia has drifted from the enforced atheism of Communist rule. As portrayed in “The Student,” schools still appear to be in a transitional phase on this front — perhaps significantly, the action takes place in Kaliningrad Oblast, a Russian exclave that itself seems caught between different geographical and political identities.

Who wouldn’t want to watch a film about a conservative Christian’s repressed childhood? And this one seems like a particularly interesting story.

May 17, 2016
A New Kind of Bakery Discrimination: Customer Cancels Order Because Owners Are Muslim
Next Post