I have no problem (obviously) with people who criticize religion. But when that criticism comes from people guilty of the very same problems, you have to wonder what went through their heads.

Just look at what Pastor Michael Harrington put up on the signs outside Belmont Drive Missionary Baptist Church in Hood River, Oregon: 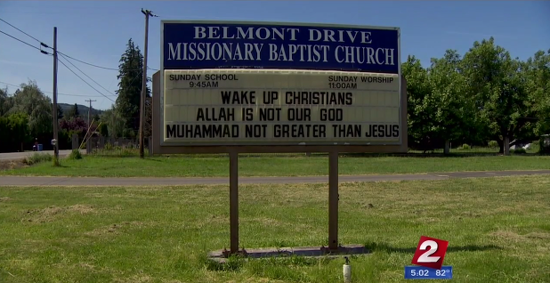 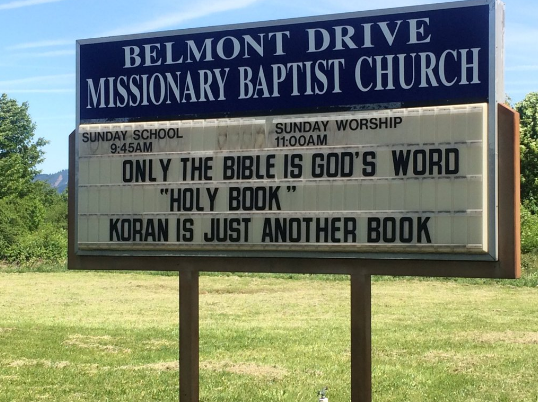 Wake up Christians.
Allah is not our God.
Muhammad not greater than Jesus.

Only the Bible is God’s Word.
“Holy book.”
Koran is just another book.

I didn’t realize there was a problem with Christians who believed in “Allah”… but Harrington apparently does. It’s also amusing as hell to watch someone say the unicorn’s horn isn’t yellow because everyone knows it’s blue.

But don’t you dare say he’s being offensive:

Harrington says he harbors no hate towards Muslims or Islam, only that he’s trying to educate others about his religion.

“It isn’t against any particular denomination. It’s just the fact that I have taught and will continue to teach that I have one God, one way of salvation and one Bible that’s holy,” Harrington said.

Again, of all the things people need to know about Christianity, the fact that it’s not the same is Islam is usually a given. And it’s idiotic to say it isn’t against a “particular denomination” when it’s really against the entire faith.

I would love to know how the pastor would react if a local mosque put up the same messages, phrased the same way, with only the Christian and Muslim references switched around. Would it be offensive then?

May 16, 2016
This Yelling Christian Mother of 12 Leads Her Kids On a Hate Parade Through a Target Store
Next Post