Justice Clarence Thomas Tells Graduates Not To Hide Their Faith and To “Thank Your Pastor” May 16, 2016 Terry Firma

On Friday, Supreme Court Justice Clarence Thomas gave the 2016 commencement address at Hillsdale College in Michigan. It was an uneven performance. The supposedly brilliant jurist didn’t know the difference between demure and demur (8:52), struggled to get the Latin phrase ab initium out of his mouth (14:29), botched a Lincoln quotation (16:43), and was even reduced to pronouncing the word defy three times before he hit pay dirt (20:00). 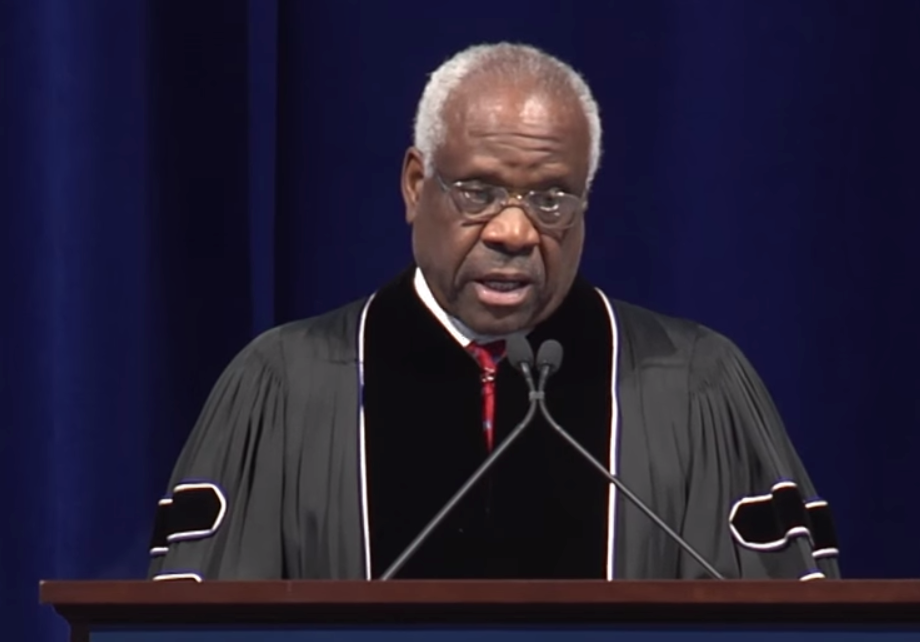 Clarence Thomas addressed the connection between liberty and personal responsibility in a powerful commencement address…, lamenting what he called “a bygone era” of the “hallmarks of my youth.” “I admit to being unapologetically Catholic, unapologetically patriotic and unapologetically a Constitutionalist,” the Supreme Court Justice told Hillsdale College graduates. “Do not hide your faith and your beliefs under a bushel basket, especially in this world that seems to have gone mad with political correctness.” …

Using his upbringing on a farm as a frame of reference, Thomas said that these days, “hallmarks of my youth, such as patriotism and religion, seem more like outliers, if not afterthoughts. … [W]hen we heard the words ‘duty,’ ‘honor,’ ‘country,’ no more needed to be said. But that is a bygone era.”

Thomas, at 32:43, reminded graduates that they should thank their parents and teachers, and also their pastors. He did not elaborate on why the latter are a fitting recipient of students’ gratitude. Parents raise you and in most cases (help) pay for your education. Teachers — well, I don’t have to explain how teachers make a difference. Why mention pastors in the same breath? They fill your head with certified nonsense and get paid for it. What does a pastor contribute to a child’s life that deserves high praise, especially compared to what parents and teachers do?

On the other hand, there were many things in the learned Justice’s speech that will get almost everyone to nod along. Who would object to lending an ear to a friend who’s going through a difficult time (33:35) or reject the notion that it’s kind to reach out to “that shy person that’s not so popular” (33:17)? Also, few Americans would quibble with the values Thomas espoused — liberty, duty, kindness, hard work — although he made it sound like he thinks of himself as terribly old-fashioned for even bringing them up, thereby coating his address in a weird kind of kids-these-days patina.

The hoariest bit was no doubt Thomas’ invocation of John F. Kennedy‘s “ask not what your country can do for you” (26:31), an evergreen whose deployment betrays that being an originalist does not equate being original.

As a conservative Catholic, Thomas appears to have bought into the idea that displays of religion are ever under attack; hence his exhortation to Hillsdale grads to not hide their faith “under a bushel basket.” It’s weak fare. Combined with the gaffes, the lack of creativity, and the monotonous, passionless elocution, Thomas once again came across as a man whose lights are on despite no one being home.

Fellow Catholic Stephen Colbert once described him as

“a rock… in that he could be replaced by a rock and I’m not sure anyone would notice.”

Colbert said that, I think, in reference to Thomas not having asked a question from the bench in ten years. That changed temporarily after the death of his partner in thought Antonin Scalia, but maybe taciturnity is a good thing in Thomas’ case; when the Justice does express himself, few beyond the FOXosphere use superlatives to describe his eloquence.

May 16, 2016
If a Christian Yells About Bathrooms in a Target Store and No One Hears It, Does It Count?
Next Post