Ken Ham can’t understand why atheists are gathering in Washington, D.C. next month for the Reason Rally. So he went on a long Twitter rant yesterday answering his own question.

In short, he thinks atheists are getting together to worship themselves. Because if we’re not worshiping God, there must be something to fill that hole in our hearts. 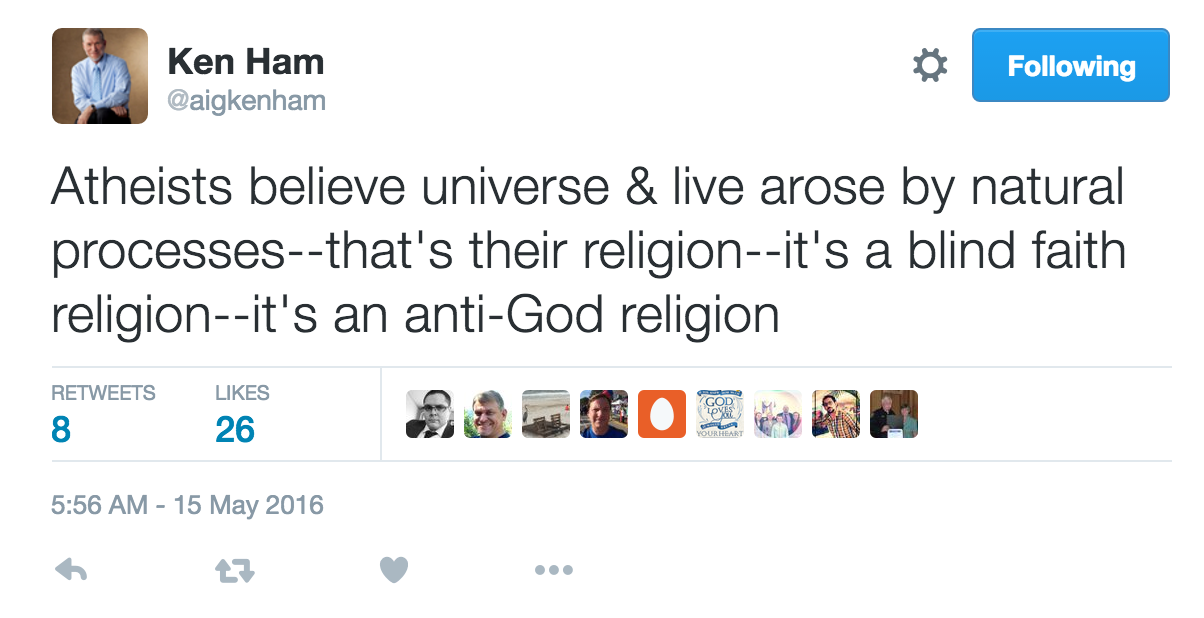 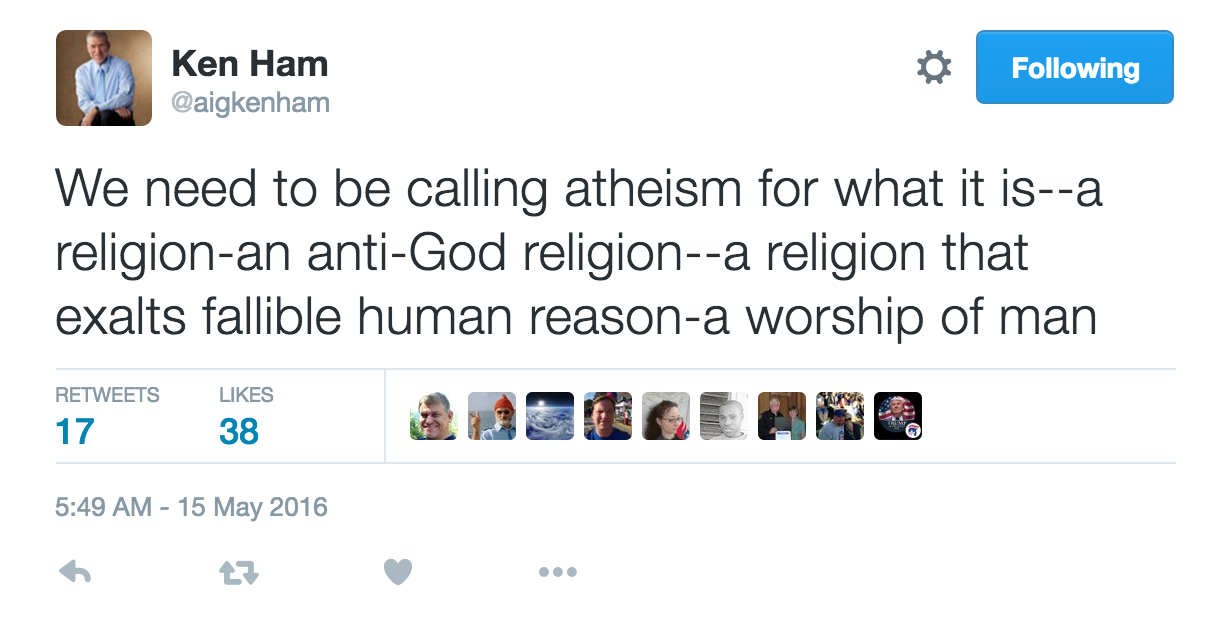 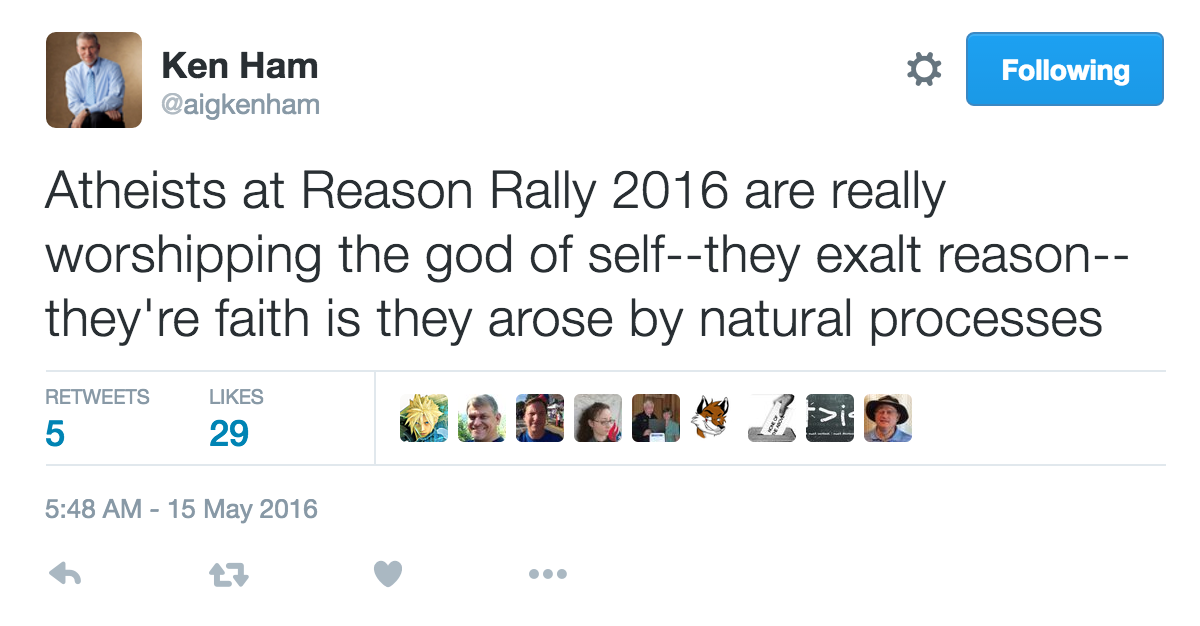 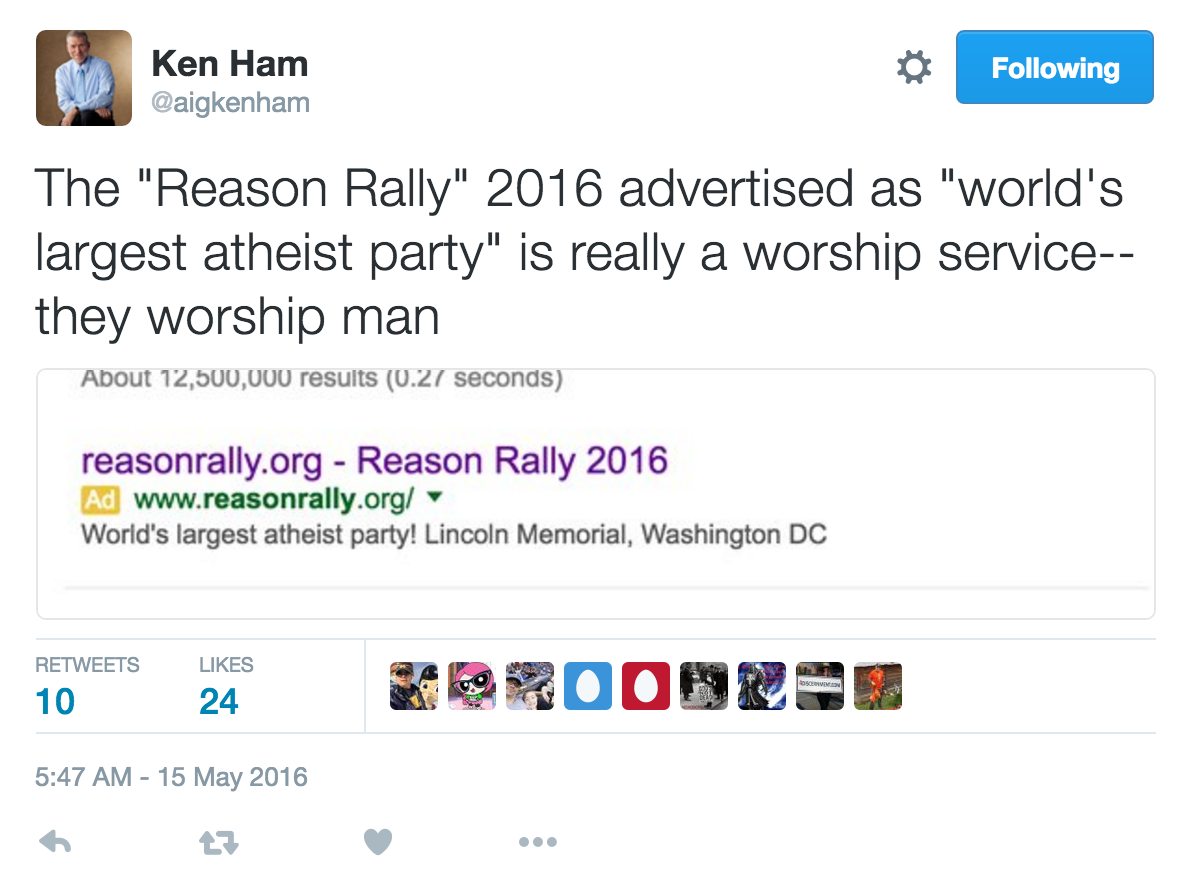 What about the speakers? Well, Lawrence Krauss is worshiping something, too… 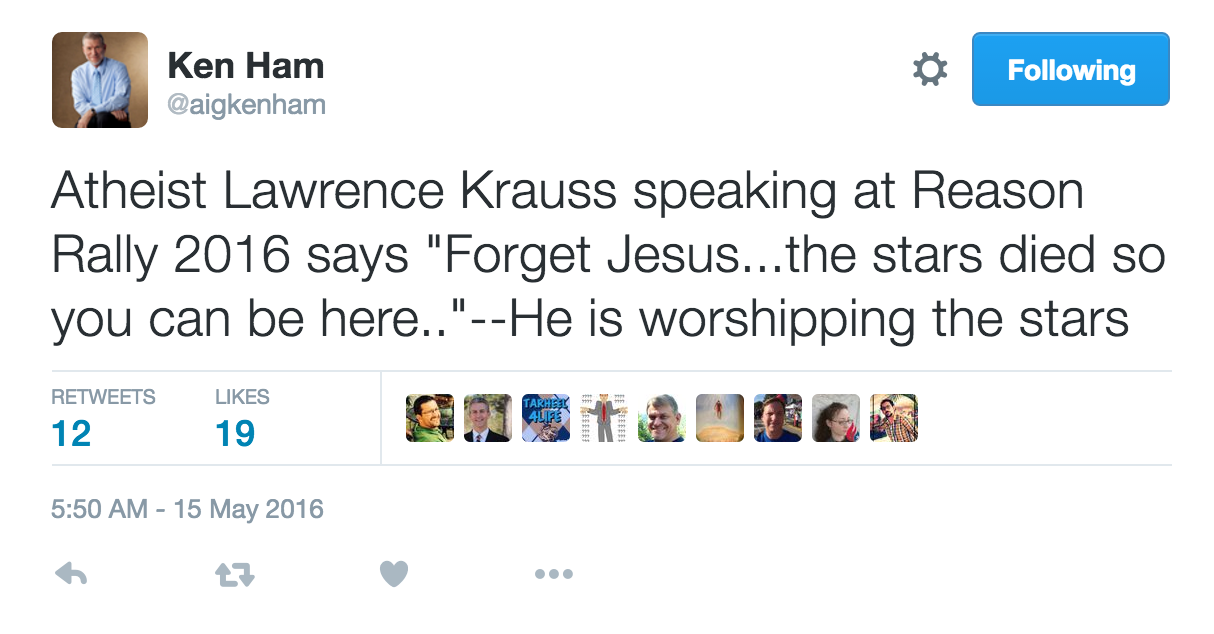 Ham also claimed atheists were being too closed-minded: 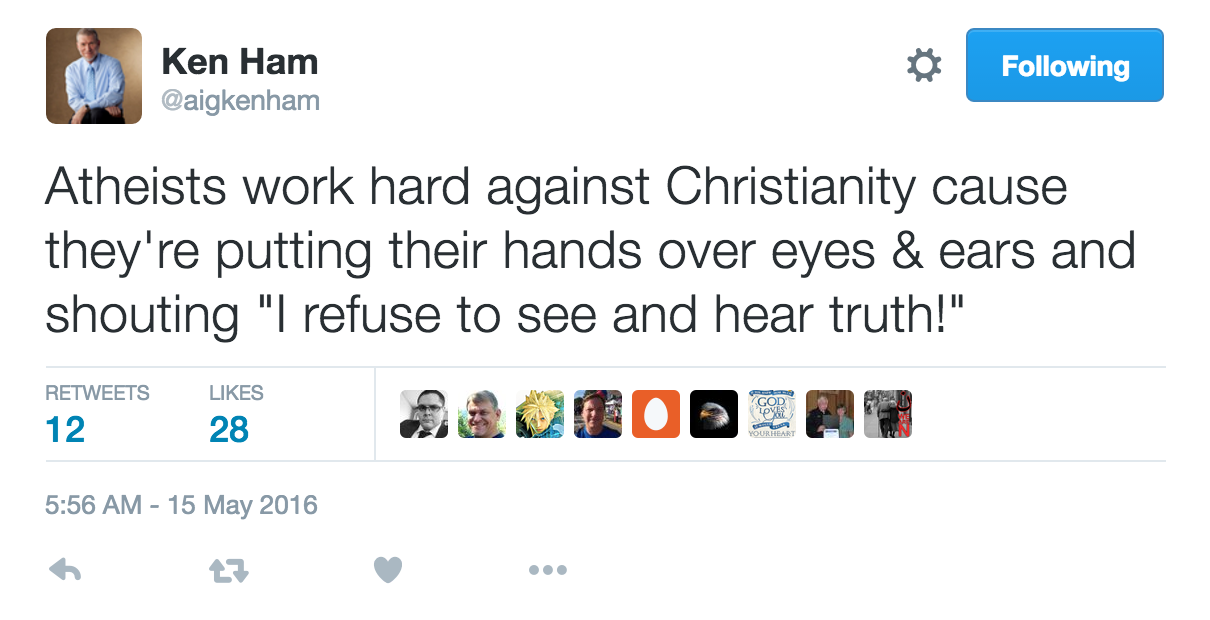 That’s rich, coming from the guy who builds multi-million dollar buildings promoting the first few pages from the Bible because everything else is blasphemy.

Maybe the most ridiculous claim was that the Rally was an “attack” on Christianity: 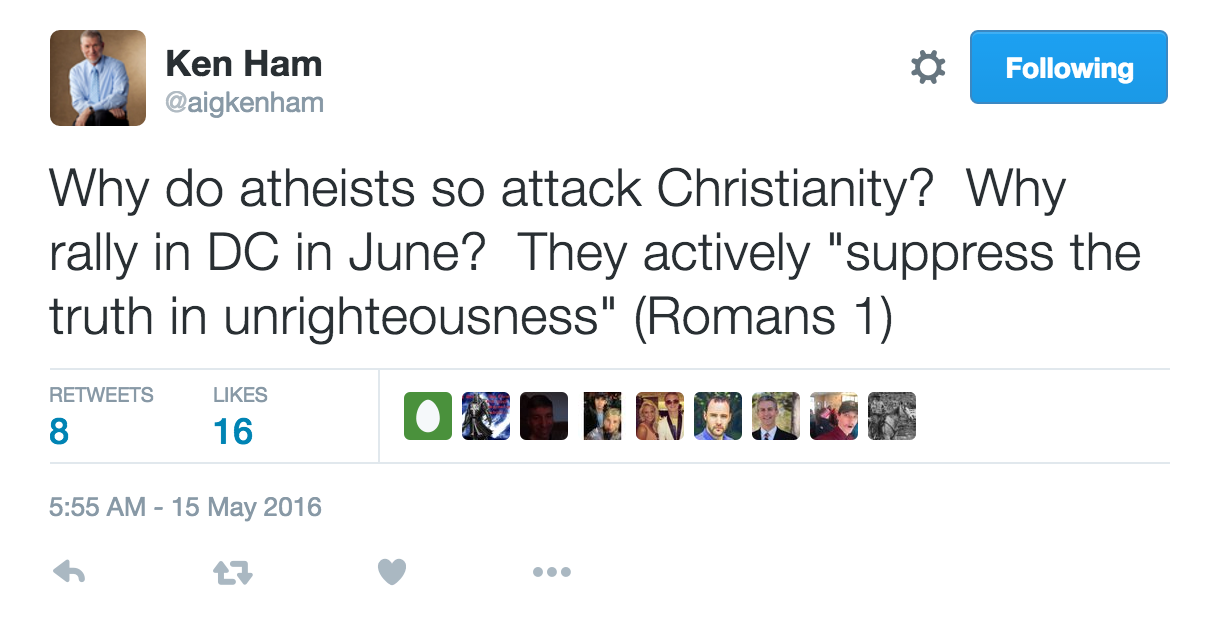 Just to be clear, he’s saying our mere existence amounts to Christian persecution. Should we be complaining that every church gathering in the country amounts to a nationwide attack on atheists?

And we’re meeting in June because school’s out, the weather will hopefully cooperate, and critics will never be satisfied no matter what date we meet. (Can you imagine how much Christians would whine if the rally took place in December?)

Ham, of all people, should understand this since his Noah’s Ark theme park opens up just weeks later.

None of this stopped him from predicting what all the Rally speakers would say: 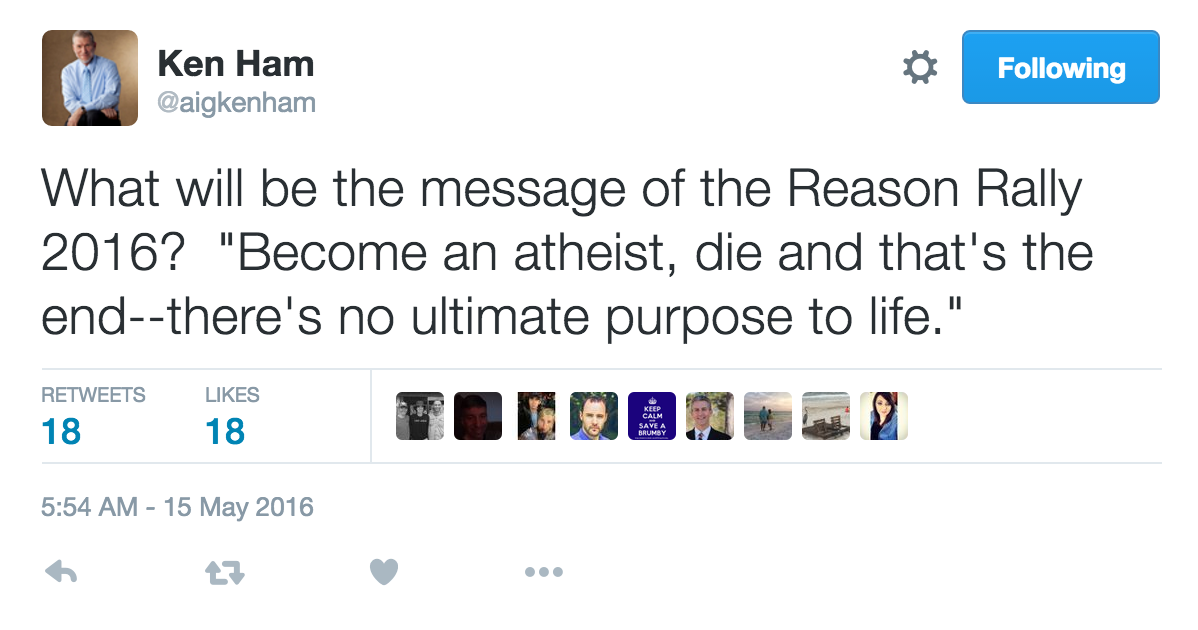 No wonder he always sounds so bitter. He thinks atheism is only about how shitty life is.

He doesn’t get that acknowledging this is the only life you have gives you even more reason to make the most of it, to educate yourself, to be in awe of the fact that you survived miraculous odds to be alive. Even in the short term, we need atheists to be politically active, working for separation of church and state in their own communities, preventing people like Ham from spreading his nonsense beyond the bubbles he creates.

Maybe he would learn what the Rally’s about if he bothered attending in person. But doing research of any sort has never been his strong suit.

May 16, 2016
A Flip Book of Our Evolutionary History
Next Post

May 16, 2016 This Yelling Christian Mother of 12 Leads Her Kids On a Hate Parade Through a Target Store
Browse Our Archives
What Are Your Thoughts?leave a comment