Thanks to a New Texas Law, An Atheist Has Been Able to Document Prayers at School Board Meetings May 15, 2016 Hemant Mehta

Thanks to a New Texas Law, An Atheist Has Been Able to Document Prayers at School Board Meetings

On January 1 of this year, a new law went into effect in Texas. Among other things, HB 283 requires any school district with student enrollment of over 10,000 to essentially make video and audio recordings of all board meetings available to the public. Many districts, large and small, do this on their own already, but the TX law now mandates it for the larger ones.

That gave one reader of this site — let’s call him Bob — an idea: If all of these meetings are being recorded, we can finally have a record of which school boards are praying during meetings. Forget relying on a local citizen who just so happens to attend these meetings and knows to report these incidents. 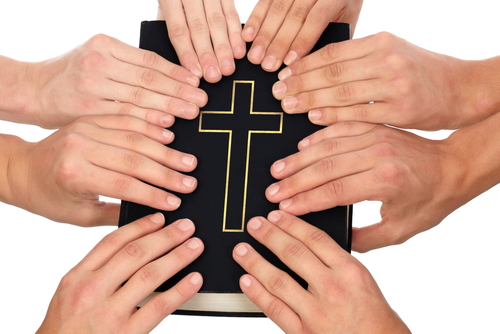 If there was evidence of prayers at meetings, letters of complaint could be sent to the school boards urging them to stop proselytizing. And who knows, maybe one of these instances could lead to a court challenge that ultimately stops this practice for good. Make no mistake: School board prayers are different from city council invocations because they directly involve students. The Texas Association of School Boards even warns board members about including prayers at meetings:

Given the confusing history of the legality of prayer before school board meetings, what is a school board to do if it wishes to pray before board meetings? Essentially, the board needs to consult very carefully with its local counsel and weigh all of the pros and cons. The legal risks associated with the practice are obvious — courts around the country, and even in our own Fifth Circuit, are not consistent in their analysis. Choosing not to pray at school board meetings allows a school district to avoid the time and expense of confronting a legal challenge…

So even Texas is telling school boards not to pray if they want to avoid a legal challenge.

But even with all the data out there, someone would have to keep track of all those board meetings.

That’s just what Bob did.

Using information available online, Bob figured out that there were exactly 100 districts in Texas with a population of 10,000 or more students. He created a spreadsheet listing every one of them, noted where they would be posting their recorded meetings online, and began keeping track of everything. Since 98 of the 100 districts were complying with the new law and posting their meetings online — we’ll ignore the other two for now — it allowed him to track the prayer situation pretty closely. He watched the beginnings of all the meetings, noted if a prayer was said, and wrote down what kind of prayer it was.

Within a few months, he had a good idea of which districts were violating the law, and how they were doing it.

Guess how many were praying? He told me in an email:

Yes, half of the 100 largest school districts in Texas had at least one prayer during a public school board meeting in the first few months of 2016. For most of these school boards a prayer or invocation is an agenda item, listed right before the pledges of allegiance to the US and Texas flags.

And of the 88 meetings that had prayers in January and February of this year (some of which were in the same districts), Bob noted who led them:

They were predominantly Christian prayers, too, in case you had any doubt. Bob kept track of the word count:

(I did not hear any references to Allah, Satan, or Buddha.)

What can you do with all this information?

For now, Bob sent the praying districts an email urging them to read the Freedom From Religion Foundation’s guidelines on school board prayer. No further action has been taken yet, but the point is that it can be, if anyone chooses to pursue this. FFRF could easily send a letter to every district violating the law, in part because everything is documented so well. You don’t have to take Bob’s word for it, either; the links are there for anyone who wants to verify this information. (By the way, if there are people in these districts willing to stand up for church/state separation, we could, in theory, see lawsuits in the future.)

Feel free to check out the spreadsheet for yourself. It’s still a work in progress, but there’s a lot of information there. Keep in mind that the red cells indicate prayer at a meeting, and then ask yourself: How bad is the situation in my state and could I do the same thing?

May 15, 2016 One Man's Quest to Track the 186 Ten Commandments Monuments Gifted to Politicians Decades Ago
Browse Our Archives
What Are Your Thoughts?leave a comment