President Obama Quotes Carl Sagan at Rutgers: “Embrace What is True Rather Than What Feels Good” May 15, 2016 Hemant Mehta

President Obama Quotes Carl Sagan at Rutgers: “Embrace What is True Rather Than What Feels Good”

Earlier today, during the commencement ceremony at Rutgers University, President Obama delivered a speech that, in part, took aim at the modern disdain for people who know things. And he quoted none other than Carl Sagan, whose career was centered around educating others on the wonders of the universe.

That portion of the speech began at the 26:15 mark below: 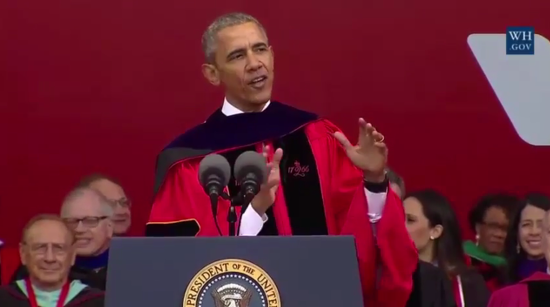 … when our leaders express a disdain for facts, when they’re not held accountable for repeating falsehoods and just making stuff up, while actual experts are dismissed as elitists, then we’ve got a problem.

You know, it’s interesting that if we get sick, we actually want to make sure the doctors have gone to medical school, they know what they’re talking about. If we get on a plane, we say we really want a pilot to be able to pilot the plane.

And yet, in our public lives, we certainly think, “I don’t want somebody who’s done it before.” The rejection of facts, the rejection of reason and science — that is the path to decline. It calls to mind the words of Carl Sagan, who graduated high school here in New Jersey, he said: “We can judge our progress by the courage of our questions and the depths of our answers, our willingness to embrace what is true rather than what feels good.”

Some saw the speech (and that section of it) as a slam on Donald Trump, who knows very little about how the world works but has all the confidence in the world, but it’d be unfair to think so narrowly. Trump isn’t the only politician who embraces conspiracy theories and offers policies that have no foundation in the facts.

Criticize Obama all you want when he falls short, but if Trump wins the election, we’ll have a President whose decisions may depend on how much it works up his reactionary base. After all, as Trump has said on the campaign trail, “I love the poorly educated.” Of course he does. In that context, they’re the ones who’ll believe whatever he tells them instead of trying to understand what the truth really is.

May 16, 2016 A Flip Book of Our Evolutionary History
Browse Our Archives
What Are Your Thoughts?leave a comment