OK Legislator Who Once Said Gay People Are Worse Than Terrorists Repeats Line in Farewell Address May 15, 2016 Hemant Mehta

In a political season where you fear for the future of the country, there’s some good news out of Oklahoma: State Rep. Sally Kern won’t be back in office since she’s term-limited out of running again. It means one of the most anti-gay legislators in the country is going back to the sewers from whence she came. 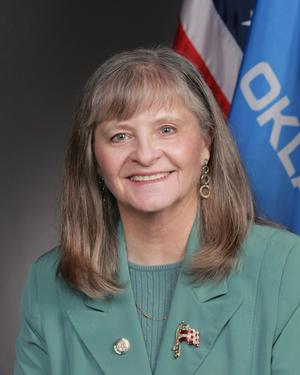 Kern first made headlines in 2008 when she said that homosexuality was a bigger threat to our nation than terrorism.

“Studies show that no society that has totally embraced homosexuality has lasted more than, you know, a few decades. So it’s the death knell of this country. I honestly think it’s the biggest threat our nation has, even more so than terrorism or Islam, which I think is a big threat… If you got cancer or something in your little toe, do you say, well, you know, I’m just going to forget about it because the rest of me is fine? It spreads. OK? And this stuff is deadly, and it’s spreading, and it will destroy our young people, it will destroy this nation.”

Kern made similar comments in the years since. Ellen Degeneres, for one, had a field day with it:

She was still at it last year, filing multiple anti-gay bills that were simply vile. One straight-up allowed anti-gay discrimination for businesses, another legalized gay-conversion therapy, and a third banned the state from supporting same-sex unions or giving marriage licenses to gay or lesbian couples.

And now she’s going away.

So what did she say to her colleagues in her farewell address to them?

No surprise there: She once again compared gay people to terrorists.

Yes, in 2008, I did say that the homosexual agenda is worse than terrorism. Now we all know that terrorism destroys lives, property, and brings devastation. Just look at where we are today in our society. A man who feels like a woman can go into a ladies’ restroom now. A florist, a baker, a photographer are being ruined financially because they wouldn’t participate in a same-sex wedding since it goes against their sincerely held religious beliefs.

Same-sex marriage has been forced on every single state by the courts, when 31 of our states voted overwhelmingly to define marriage as God has always defined it. In schools all across the nation, children are being encouraged to try the homosexual lifestyle and even to play-act like the opposite sex because they could be a transgender. And homosexuals are even wanting churches to be punished for just sharing what the Bible says, if it contradicts what they want. These are real examples that have been taking place in the last few months.

I really hope that speech inspires legislators to do a better job of funding education, because Kern obviously learned nothing in her years in office.

It’s not just the hate that upsets me. It’s that we’ve made stunning advances in LGBT rights since 2008 — Kern has had the chance to see the complete lack of devastation as a result of marriage equality, and yet she still clings to her bitter, faith-fueled bigotry.

Good riddance. If only she could take other Republicans with her as she leaves.

May 15, 2016
Even More of Ayaan Hirsi Ali's Best Arguments and Comebacks
Next Post

May 15, 2016 TN Sheriff Who Promotes Jesus on Department’s Facebook Page May Counter-Sue American Atheists
Browse Our Archives
What Are Your Thoughts?leave a comment