I love it when logically incoherent people are forced to answer for their inconsistencies.

Want to make anti-abortion advocates squirm? Ask them what the punishment should be for women who have abortions. Because if abortion really is murder, it’s *really* hard to argue that murderers should be let off the hook. (Donald Trump learned that the hard way back in March.)

Want to make Christian pastors squirm? Ask them if Anne Frank is in Hell right now. Because if you have to accept the divinity of Christ to get to Heaven, every dead Jewish person must be getting tortured as we speak. (Some of them will try to get out of admitting that by saying they hope Anne Frank converted before her death.)

And now we know what to ask conservatives who argue that transgender people must use the bathroom corresponding to their biological sex: What bathroom should trans people use after they’ve transitioned?

In other words, when a transgender man has a beard and mustache, should he be forced to go into a women’s bathroom (since that’s what his birth certificate would dictate)?

The question gets even more awkward when a transitioned person is part of the interview.

That tripped up the Family Research Council’s Travis Weber this week when MSNBC’s Chris Matthews asked him what bathroom guest Jennifer Finney Boylan should use: 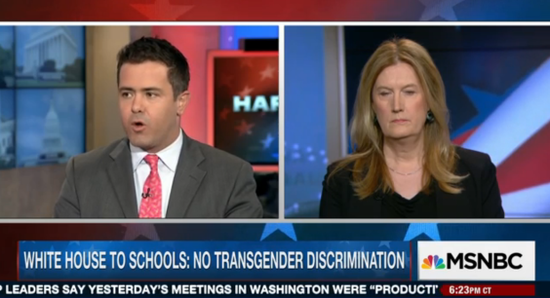 MATTHEWS: Travis, tell Jenny what bathroom she should use.

MATTHEWS: Which one should she use?

WEBER: I think people should be —

WEBER: I think we can do things the way we’ve done them for decades, and people could use bathrooms according to biological sex with specific accommodation made for people who have a genuine issue. If we look at the North Carolina law, it made an accommodation. People are not happy with that, however. And now the Obama administration —

MATTHEWS: Let’s just talk about transgender people. What should a transgender person who identifies as a woman do? What bathroom should they go to? Just keep it simple.

MATTHEWS: See no, you can’t answer the question, can you? What should they do?

WEBER: They can use the bathroom of their biological sex, except when there’s a genuine issue and an accommodation can be made.

MATTHEWS: Which should Jenny do if she was visiting North Carolina right now? Should she go to the men’s room? Should she? You’re dodging the toughest question, which is what do you want people to behave like?

MATTHEWS: Well what should she do?

MATTHEWS: She should go to the men’s room?

WEBER: Actually a private business can do whatever they want regarding bathrooms. And if it’s in a certain government accommodation —

WEBER: They can have, an accommodation can be made to protect the privacy of the student.

MATTHEWS: Can you answer the question? Should Jenny go to the men’s room or the ladies room?

WEBER: Well, she can use an accommodation bathroom that is a single use bathroom that would protect the privacy interest of the students on the other side. Now let me say this —

MATTHEWS: No, no, let her respond to that. Did that mean anything to you, Jenny?

BOYLAN: That’s gobbledygook. That means nothing. I am a woman. I have an F on my driver’s license. I have the anatomy of a woman, but because my birth certificate says M, I would have to go to the men’s room. And that makes me unsafe.

WEBER: We have to protect the privacy interests of people on both sides.

MATTHEWS: See, you’re dodging this question. It is a tricky question, but it’s an important one.

BOYLAN: He is dodging the question. It’s a simple question. I will be in the ladies room, thanks very much.

PATRICK: Megyn, look, I have four grandchildren and two children. I don’t want my 8-year-old granddaughter walking into a bathroom with a 30-year-old man there. And no one else does. Anyone who has a grandmother, mother, a wife, a sister, a daughter, a granddaughter doesn’t want that exposed to them.

Even on MSNBC’s AM Joy this morning, Heritage Foundation fellow Genevieve Wood couldn’t grasp the concept of a fully-transitioned trans man — or a trans person at all.

REID: But that’s what would happen if this law is implemented, is that transgender men, who have beards and mustaches, will be in the ladies’ room, because the law says they have to be in there.

REID: No, it says you have to go where your biologic– birth certificate says.

REID: So if you were born a female, and you’ve transitioned over, and you are now a transgender man, with full facial hair, you will be in the ladies’ room. That’s what the law says.

WOOD: That may be what the law– The law doesn’t say specifically that. You’re saying that’s what the outcome could potentially be.

REID: That is what the outcome would be. Do you think that women should be forced to be in the restroom with somebody who is identifiably, to what they see, a man?

WOOD: I don’t think it’s ideal, but here’s reality: I don’t think a man who’s gone through a full transition to become a woman is still gonna have a full beard. I haven’t seen that happen. The reality is–

WOOD: I think you’re picking a really extreme case to try and go in a different direction.

None of these are “gotcha” questions. They’re extremely basic ones, yet they completely flummox the bigot brigade. If conservatives want trans people to go to bathrooms matching their birth certificates, that rule would also apply to fully transitioned trans people. Is that really want they want?

By their own logic, conservatives are calling for people who look like women on the outside to go into a men’s bathroom and vice versa. That’s far more awkward and dangerous than the scenarios they’re trying to avoid.

Might as well keep grilling them on it since it exposes how little they’ve thought through their ideas.

May 14, 2016
Sarcastic Billboard Asking Why Jesus Rules the Air Force Academy Rejected for Being "Not Factual"
Next Post