A Woman Was Fired by a Christian Charity For Supporting Marriage Equality. Why Is She Surprised? May 14, 2016 Hemant Mehta

A Woman Was Fired by a Christian Charity For Supporting Marriage Equality. Why Is She Surprised?

A woman in Newfoundland is getting a lot of public support after she was fired as a leader of a Christian charity because of her support for LGBT and abortion rights. 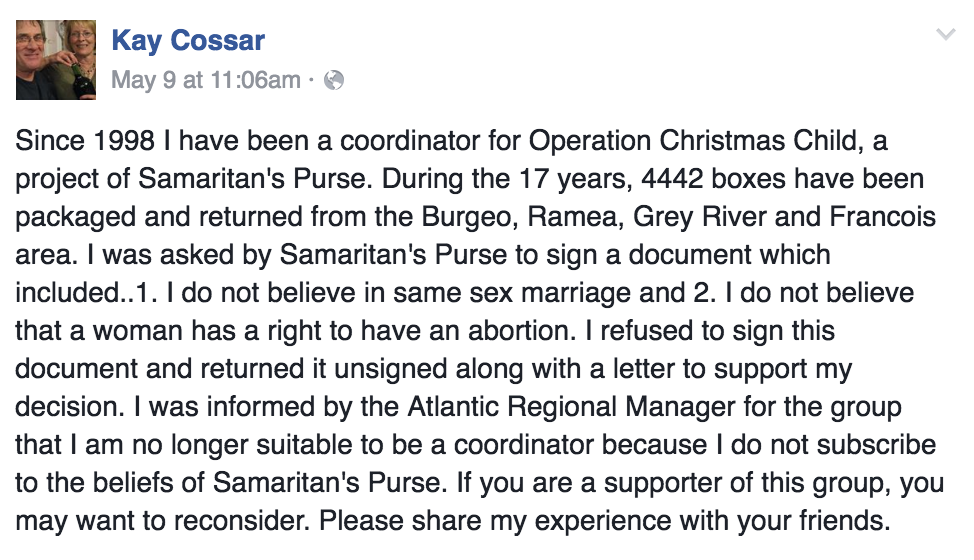 Kay Cossar was sent packing as regional co-ordinator of Operation Christmas Child after she refused to sign a statement of faith that denounced same-sex marriage and abortion.

I obviously welcome her positions on these issues, but I’m not sure she deserves as much credit as she’s getting. After all, the organization that runs Operation Christmas Child, Samaritan’s Purse, is run by bigot Franklin Graham, who has always been open about his homophobia. Cossar is acting like this is a big surprise.

“I guess I’m shocked because we’re in 2016,” Cossar said Thursday from Burgeo on Newfoundland’s south coast. “I would have thought the group would have been more open-minded,” she said of Samaritan’s Purse, an international charity based in Boone, N.C., that runs the program.

Why on earth would she be shocked? It’s only 2016 for those of us who live in reality. The people in the evangelical Christian bubble are always a few decades behind.

The charity had every right to remove her as a leader — and it should be noted they would have let her stay on as a volunteer if she wanted. Complaining about this group’s bigotry after they remove you from a leadership position makes as much sense as blaming a Catholic school for firing you after you marry your same-sex partner. You should’ve known the rules before you began working there.

Of course Franklin Graham is a bigot. Of course the Catholic Church doesn’t give a damn about you if you’re gay. Of course Samaritan’s Purse doesn’t want leaders who treat everyone with respect and dignity. This wasn’t a surprise they suddenly sprung on Cossar. All she needed to do was a Google search to realize the type of group she would be working with.

Still, if her post helps open people’s eyes to the problems with the organization, more power to her. Maybe it’ll prevent other potential volunteers from making the same mistake.

(Thanks to @andystenz for the link)

May 14, 2016
Conservatives Can't Answer This Simple Question About Transgender People and Bathrooms
Next Post

May 14, 2016 Substitute Teacher Let Go By TN District After Showing Students a TED Talk by Pastor Rick Warren
Browse Our Archives
What Are Your Thoughts?leave a comment