Judge to Heroin Dealer: Read This Ben Carson Book About God and I Won’t Send You to Jail May 13, 2016 Hemant Mehta

Judge to Heroin Dealer: Read This Ben Carson Book About God and I Won’t Send You to Jail

Youri Whindleton could have been sentenced to 5-10 years in jail for dealing heroin and carrying a gun, but Pennsylvania Judge Anthony M. Mariani gave him a way out. All he had to do was read a book by Dr. Ben Carson — a book that promotes God non-stop — report back what he learned from it, and spread the word to people he knew. 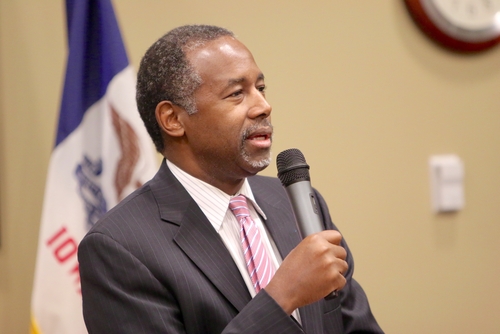 That’s what Whindleton did, and that’s why he’s not going to jail:

… on Wednesday the defendant — dressed in orange, the book held in his shackled hands — described the book, its premise and what it meant to him. He talked of developing his talents, being honest, cultivating insights, accruing knowledge and developing a relationship with God.

He said he was moved to share the book with other prisoners in his 60-person pod at the Allegheny County Jail. In fact, he said he was scheduled to make a presentation about the book Friday during a “graduation” of one of the prisoners from a special jail program in which Mr. Whindleton participates. He said the biggest points he learned from the book were to “put God first” and to be more patient.

“I think you’ve demonstrated that you get it,” Judge Mariani said. He acknowledged the risk associated with “going in another direction” from the sentence being sought by the Allegheny County District Attorney’s and county probation offices.

Whindleton will be out on parole for the next 20 months, followed by three years of probation, but he won’t have to spend any time behind bars. While he’s the first to get out of jail through this “book report” method, he likely won’t be the last since Mariani plans to do it with other criminals as well.

I’m all for less incarceration and giving people second chances, but it’s extremely troubling — and possibly illegal — that the judge is assigning a book promoting Christianity.

If Whindleton didn’t believe in God, or didn’t buy into the Jesus-y message, would he be in jail right now? If he disagreed with Carson’s politics, would he face a harsher penalty for the same crime?

Those are questions that go ignored in the Pittsburgh Post-Gazette article but church/state separation groups should look into. I’ve passed this story along to them.

(Image via Rich Koele / Shutterstock.com. Thanks to Cyndi for the link)

May 13, 2016
After Iowa Synagogue Gets Vandalized, Local Atheists Assist in Clean-Up Efforts
Next Post