At a rally in Blackwood, New Jersey yesterday, Susan Shin Angulo introduced Hillary Clinton with a reference to the Pledge of Allegiance, but stumbled over the words “Under God.”

I don’t know whether it was deliberate (she didn’t want to say those words) or accidental (she just botched the phrasing), but conservatives are having a field day calling it an “awkward” error and saying that Clinton’s laughter shows her lack of patriotism. 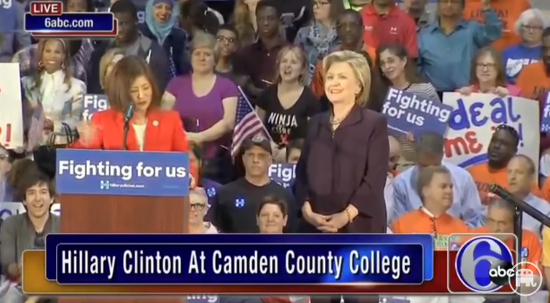 Only Hillary can bring us together as one nation, un…. Indivisible, with liberty and justice for all!

I’ve listened to that clip a few times and I can’t tell why she screwed up. If it was a plot to never say the word God, then someone should tell Clinton, who frequently talks about how we must live up to our “God-given potential” in her speeches.

Why the laughter on her part? Because it was simply the polite thing to do when someone flubs your introduction. Clinton didn’t bring additional attention to the speaker by reacting in a big way; she just shrugged it off and moved on.

This is not a big deal.

I wish I could say Angulo was an atheist trying to make a point… but it seems like she just tripped over her own words. Now, conservatives are eager to turn this into a controversy because they’ll do anything at this point to take Donald Trump out of the spotlight.

May 12, 2016
NC School District Considers Letting Students Carry Mace to Protect Themselves in Bathrooms
Next Post

May 12, 2016 Christ-Loving George Zimmerman Is Auctioning Off the Gun He Used To Kill Trayvon Martin
Browse Our Archives
What Are Your Thoughts?leave a comment