Scores of Christian Asylum Seekers in Germany Report Being Attacked By Muslim Refugees May 12, 2016 Terry Firma

Throw a number of people together in new and trying circumstances, and you’ll have some version of The Real World or Big Brother on your hands. Turf will be fought over, feuds will fester, power struggles will erupt, and annoying habits will become flashpoints for more of the same.

Now throw competing religions into the mix, and the situation is sure to take a dramatic turn for the worse.

That’s what’s happening in refugee centers all over Germany, among many of the 1.1 million asylum seekers who arrived in that country last year from war-torn nations like Syria, Afghanistan, and Iraq. 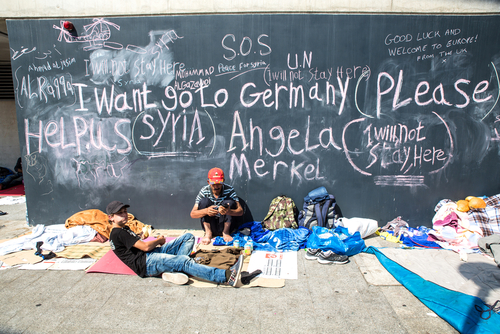 Fadi S. fled Syria to escape Islamist extremists, fearing for his life. But after the Christian refugee finally arrived in Germany, he realized that he might still be in danger. … Fadi S. said he was shocked when he found out that Germany was not the safe heaven he had expected it to be.

Christian refugees like [him] increasingly face physical and verbal assaults by other migrants and security personnel in Germany.

The conflation of “other migrants” and “security personnel” is weird. Both types of attacks surely occur, but they involve different perpetrators, and presumably occur for entirely different reasons. As a skeptic with cynical tendencies, I suspect Noack mixes them up more or less deliberately, to set the stage for a later paragraph that allows him to appear evenhanded. We’ll get to that in a minute.

Although the report documents more than 200 cases of attacks — ranging from verbal abuse to death threats and sexual assaults — the authors estimate that as many as 40,000 Christian refugees could be affected overall. …

Many affected refugees are too afraid to inform the police about the attacks, which is why authorities might still not fully be aware of the extent of the problem. Instead of calling the police, many refugees might have preferred to inform private NGOs or other organizations such as Central Council of Oriental Christians, which operates an emergency hotline. The council says it now receives as many as 100 emergency calls per day.

… described the mood among many Christian refugees in the country as being defined by “fear and panic” at the moment. Eighty-six refugees out of the 231 affected individuals said they had been physically attacked.

Then the Post‘s Noack again reaches for the apples and oranges.

However, according to Germany’s public TV station ARD, critics have accused the NGOs behind the report [about the violence] of focusing exclusively on violence against Christians — and neglecting attacks against Muslim refugees, for instance. In January, Amnesty International released a report documenting assaults, harassment and exploitation of refugees in reception centers in Europe — including in Germany that did not differentiate between violence targeting Muslim or Christian refugees.

That’s a puzzling paragraph. I followed both those links. The one to ARD TV yields a 76-second video report, in German, that doesn’t talk at all — not one word — about how attacks on Muslims are being swept under the rug. The only sentence that sort of touches on the issue is

Which means something like (native Germans feel free to correct me),

Critics says that Open Doors and other organizations present Christians as being uniquely persecuted by Islam.

Admittedly, that leaves open the possibility that some of the harassment and violence goes the other way, with Christians bullying Muslims — but Noack doesn’t back that up with any actual facts. Christian-on-Muslim violence in German refugee centers seems relatively unlikely, or at least small-scale, given that Jesus followers among that population are a small minority.

The second link, under the word “differentiate,” goes to a Washington Post piece — also by Noack — about widespread sexual assaults on female refugees that occurred both during the women’s perilous journey to ostensible safety, and in refugee centers. Maybe some of those assaults were brought on by ethnic or religious differences, but not a word is said about that. Noack lets the impression hang there without providing a scintilla of evidence either way.

It’s not my job to absolve Christians from responsibility for shocking deeds. If anything, it’s the contrary, as regular readers know; I hold Jesus fans’ feet to the fire daily. But the Post piece bugs me because it tries too hard (and fails) to establish that both sides, Muslims and Christians, are equally affected by the problem of violence in German refugee centers; numerically, that’s a very dicey claim.

Back in September, the German newspaper Die Welt extensively chronicled the difficulties Christian refugees in Germany were experiencing at the hands of the Muslims with whom they lived in close quarters.

One interviewee said of his Sunni shelter-mates,

“They wake me before dawn during Ramadan and say I should eat before the sun comes up. If I refuse, they say I am a kuffar, an unbeliever. They spit at me. They treat me like an animal and threaten to kill me.”

Gottfried Martens, a Berlin-area pastor who ministers to Christian refugees, observes that

“Some devout Muslims [in the refugee centers] convey the view, ‘Wherever we are, Sharia is in effect; our laws rule.’ In the [communal] kitchen, Christians can’t prepare their own food. Those who don’t pray toward Mecca five times every day get bullied. “Especially Christians who have converted from Islam suffer as a minority,” says Martens. “And they ask themselves, ‘What’ll happen after the devout Muslim refugees leave the shelter? In the future, must we hide as Christians in this country?’ “…

Particularly dramatic is the case of a Christian family from Iraq, [formerly] housed in a reception center in Freising, Bavaria. The father told a television crew … of beatings and threats by Syrian Islamists. “They yelled at my wife and beat my child. They say, ‘We will kill you and drink your blood.’ ” The family lived in the rooms of the home as captives.

They were so beaten-down and afraid that they eventually returned to Iraq, to Mosul — until that city, too, became unlivable for them due to violence and discrimination. In desperation, the parents and children wanted to come back to Germany, to a different asylum center, but the rules don’t allow such a return. Their current fate is unknown.

A 15-year veteran in the refugee-aid field, Max Klingberg of the International Society for Human Rights, told Die Welt that he’s afraid the violence in German refugee centers will only escalate.

“We need to free ourselves from the illusion that all who arrive here are human rights activists. Among the new arrivals are not a small number of people whose religious intensity is at least at the level of the Muslim Brotherhood.”

Twelve Christian refugees from Nigeria and Ghana no longer have to worry about their future in Europe. Last year, they departed Libya on a boat, minority passengers among a predominantly Islamic group. Before they reached the coast of Italy, the Muslims, objecting to the Christians’ false religion, threw them overboard, drowning them.

May 12, 2016
Franklin Graham: Boycotting Companies Is Only Okay When I Say It Is
Next Post