Right-Wing Hindu Nationalists: “Only Donald Trump Can Save Humanity” May 12, 2016 Hemant Mehta

Right-Wing Hindu Nationalists: “Only Donald Trump Can Save Humanity”

Donald Trump may be causing chaos among the American Religious Right, but it looks like he has a group of right-wing fans in India: 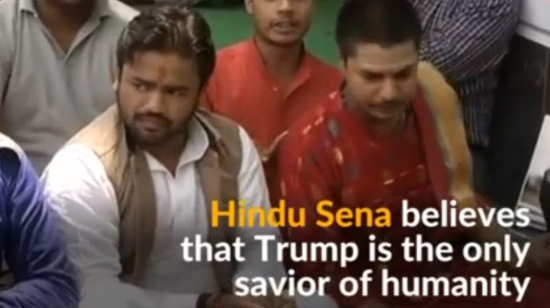 Around a dozen members of a right-wing Indian Hindu group lit a ritual fire and chanted mantras Wednesday asking the Hindu gods to help Trump win the U.S. presidential election.

“The whole world is screaming against Islamic terrorism, and even India is not safe from it,” said Vishnu Gupta, founder of the Hindu Sena nationalist group. “Only Donald Trump can save humanity.”

If Trump is ever our only hope, it’s time to let the world go.

Then again, for all we know, they’re just trying to get on Trump’s good side before he decides to ban them, too, from visiting the U.S.

May 12, 2016
Another Counseling Group Cancels Conference in Tennessee Due to Anti-Gay Law
Next Post

May 12, 2016 Televangelist Jim Bakker: The Zika Virus is Dangerous... So Buy My Giant Buckets of Food
Browse Our Archives
What Are Your Thoughts?leave a comment