On Monday, the Rowan-Salisbury Board of Education in North Carolina added to the barrage of attacks on transgender people in the state by saying students could carry mace next year, in part, it seemed, because of what one of the board members said: 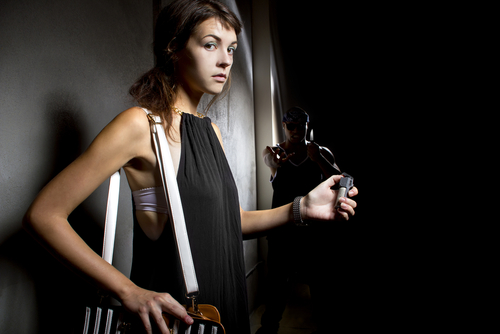 Board member Chuck Hughes was in favor of the sprays on campuses, saying that in his mind, they were purely defensive. He also referenced HB2, saying that the sprays might be useful.

“Depending on how the courts rule on the bathroom issues, it may be a pretty valuable tool to have on the female students if they go to the bathroom, not knowing who may come in,” he said.

So… mace could be used as protection against transgender students?

That’s what it sounded like and the pushback from the public was swift. On Tuesday, the board agreed to reconsider the policy for a variety of reasons. And then yesterday, even Chuck Hughes was walking back what he had said earlier:

Hughes backtracked Wednesday, telling BuzzFeed News that his comments were “inappropriate” and that they had nothing do with the LGBT community.

“I was not thinking about the LGBT issue,” Hughes said. “Perverts and pedophiles taking advantage of this law in bathrooms was my major concern.”

That’s… a horrible way to say “I’m sorry.” One of the main reasons people are criticizing the state law is because trans people are not the pedophiles and perverts the government is looking for. Hughes’ comments just fed into that myth.

He wasn’t done talking, either:

“The LGBT issue has never been a problem to my knowledge,” Hughes said. “People have a different sexual identity, they go about their business. You don’t even know that a transgender is in your bathroom. They’re not there to create havoc. But perverts are.”

Hughes said he was not homophobic and that the LGBT community had rights to be protected. “They’re not the ones to look out for,” he said. “My statement was misinterpreted and when I hear other people talking about it, I can see how it was misinterpreted.”

He said he could see teenage boys pretending that their gender identity was female to enter bathrooms “as a joke.”

The only people who even consider doing that are Christian demagogues like Mike Huckabee.

I don’t know how his comments could have been misinterpreted, but in any case, Hughes said he would change his vote when the time came. So at least he has that going for him.

For their sake, they better hope the vote is reversed. My concern wouldn’t be what happens in the bathrooms. It would be all the “pranks” and “accidents” that are bound to happen when teenagers are idiots or just despise each other. The last thing they need is a potent weapon at their disposal.

May 12, 2016
God Teaches Adam and Eve How to Make Sweet, Sweet Love
Next Post