Heidi Cruz Says Her Husband’s Loss Was God Working On His Own Time… Just Like With Slavery May 12, 2016 Rachel Ford

In general, I think it’s bad form to target a political figure’s spouse for criticism or ridicule. Even when they say or do moderately dumb things, they are not, after all, the candidate, so they deserve a much more generous approach and less scrutiny than someone who wants to represent us.

I say “in general,” because every once in a while, a political spouse will do something so utterly, breathtakingly stupid that you can’t just ignore it. Like, for instance, comparing her spouse’s failed presidential run to the fight for emancipation.

That’s what Heidi Cruz did the other day when addressing her husband’s campaign’s “National Prayer Team”: 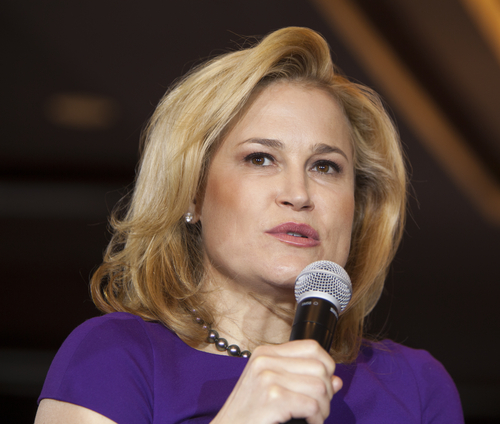 I don’t want you to feel like any of this was in vain. I believe in the power of prayer. This doesn’t always happen on the timing of man, and God does not work in four-year segments. So we love you. It has changed our lives to know you and to call you our friends. And hang in there. Be full of faith and so full of joy that this team was chosen to fight a long battle. Think that slavery — it took 25 years to defeat slavery. That is a lot longer than four years. We are full of energy. We’re going to have a great vacation. We’re going to keep moving forward.

I get that, after Ted Cruz and his family repeatedly intimated that he was more or less anointed by God Himself for victory, you need some sort of excuse when things don’t play out as planned. And it’s hard to go from “God chose Ted” to “God chose Ted to lose.”

The best you can come up with is to compare your husband’s political ambitions with the struggle to be free from enslavement?

I don’t care about the strength of your Christian Persecution Complex or your sense of entitlement. There is no comparison between not winning the presidency and being a slave. It’s amazing that anyone would even go there. I can only hope that this was an off-the-cuff remark, and not something she’d put any thought into; and even then, it’s a remarkably bizarre comparison.

If Cruz had won the nomination, it certainly wouldn’t have compared to the freedom of slaves, either. Though I’m sure the family still believes this is all part of God’s Master Plan.

May 12, 2016
Christian Pastor Tells Dubious Story of Defeating Atheist in a Debate in Under Two Minutes
Next Post

May 12, 2016 Franklin Graham: Boycotting Companies Is Only Okay When I Say It Is
Browse Our Archives
What Are Your Thoughts?leave a comment