Christian Pastor Tells Dubious Story of Defeating Atheist in a Debate in Under Two Minutes May 12, 2016 Hemant Mehta

***Update***: Looks like Barrett or his church deleted the video. Good thing I saved a copy.

There was a video posted online this week featuring a pastor named Glyn Barrett of the !Audacious Church in Manchester, England (the exclamation point is there just to make sure you’re fully annoyed by them from the get-go).

In the clip, Barrett talks about how he was invited to debate an atheist on the topic “There is no God,” and given less time to speak than his opponent, yet he still managed to outsmart him in a matter of minutes by using an old apologetic argument:

There are so many problems in this clip, it’s hard to know where to begin… but let me point out a handful of issues I have with his story.

1) No atheist group would ever try to prove “There is no god.” You can’t prove that in any definitive way. The burden of proof is always on the people making the claim, so it’d be up to Barrett to prove his God actually exists.

2) What school was this? What atheist club? Isn’t it odd that he never tells us?

3) Is there any video of this debate? If not, why not?

4) Why would atheists “boo” a debater when it’s his turn to speak? I’ve been to a lot of debates and all sides are generally very respectful of the speakers, even when they strongly disagree with their arguments.

5) Barrett’s big argument is that atheists don’t know everything, so they can’t claim with any certainty that God doesn’t exist (even though most atheists would never make that claim at all). But atheists readily admit that we don’t know everything. Of all the things we do know, however, there’s no evidence whatsoever of God’s existence. I think it’s perfectly fair to extrapolate from that.

I don’t have any evidence that unicorns exist, either, and I’m fairly certain that as mankind acquires more knowledge in the future, unicorns won’t make a sudden appearance.

Same with God. The moment I see proof, I’ll change my mind. Until then, my atheism gets confirmed no matter what I learn.

Is Barrett going to concede that, because he also doesn’t know everything, there’s a chance all the Hindu gods are real and he should therefore start believing in them? Of course not.

6) Barrett claims that if you are open to the possibility of God, that makes you an Agnostic and “one step closer to knowing my Jesus.” That’s not the mic drop moment he seems to think it is. All atheists are open to the possibility of God’s existence — just show us proof. Agnosticism, on the other hand, is all about whether or not we can ever know the answer. Barrett has his definitions all wrong.

Personally, I don’t believe this debate even happened. I think it’s just a story he tells to make himself look good. But Barrett is welcome to post a link to the actual debate so we can all see him take a victory lap in front of that atheist crowd.

***Update***: As far as I can tell, there’s only one university in Cambridge (where Barrett says this debate took place) with an atheist group. They say this never happened: 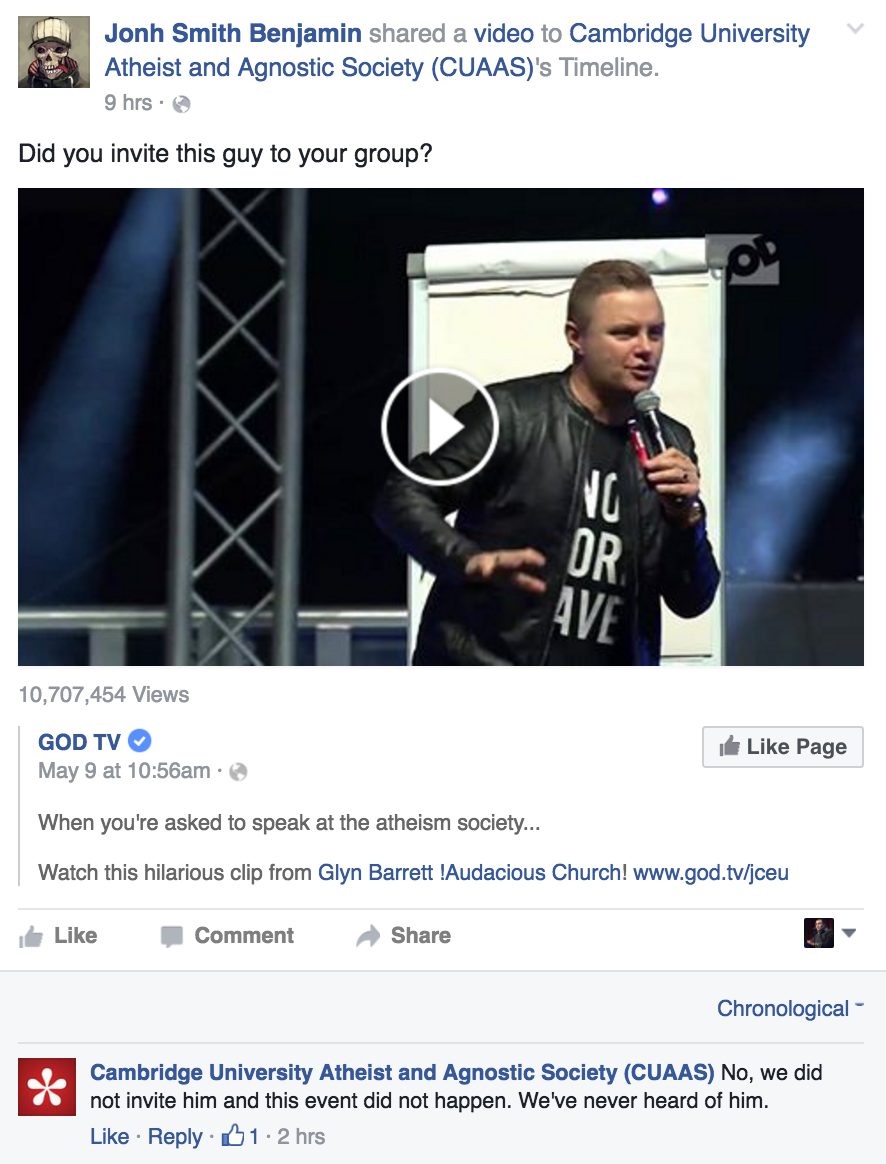 May 12, 2016
After Hinting at a New Album, Christian Band dc Talk Sells Cruise Tickets, and Fans Are Furious
Next Post

May 12, 2016 Heidi Cruz Says Her Husband's Loss Was God Working On His Own Time... Just Like With Slavery
Browse Our Archives
What Are Your Thoughts?leave a comment