This is a guest post by Chris Stedman, executive director of the Yale Humanist Community, and Tom Krattenmaker, a member of the YHC Board of Directors. Both reside in New Haven.

Winter is probably the last thing on most of our minds; we’ve just escaped its clutches and can finally enjoy the warmth of spring. But while it’s still many months until the Christmas/winter holiday season, a storyline is developing now in Connecticut with important ramifications for how our communities navigate disputes over religious symbols in public spaces — and the different approaches the growing nonreligious population might take to be heard and seen during the holiday season.

Charles Dickens’s A Christmas Carol is one of our culture’s most loved holiday stories, of course. But it’s another Dickens classic that best describes what’s happening in Connecticut: A Tale of Two Cities.

In Shelton, the Freedom From Religion Foundation is suing the city for its refusal to allow a member of the community to erect a sign in the city’s Constitution Park countering a display of heralding angels (a reference to the Bible’s account of angels heralding the birth of Jesus). The rejected sign reads “Let Reason Prevail” and goes on to assert, “There are no gods, no devils, no angels.”

Ten miles away in New Haven, the Yale Humanist Community (YHC) is undertaking a parallel but strikingly different effort. YHC, a nonprofit dedicated to building an inclusive nonreligious community at Yale and beyond, is working to add a secular holiday display to the traditional symbols that adorn the New Haven Green each December: a menorah, manger, and holiday tree. (We are both involved in YHC as the executive director and a member of the board, respectively.)

Through our recently launched “Green Light Project,” YHC has commissioned a local artist to create a large-scale interactive sculpture. The piece is intended to celebrate community and warmth during the coldest, darkest time of year, and it will shine light that changes as people gather around it, encouraging members of the community to gather together during a time of year when many feel isolated. It will also house a time capsule with messages of hope and wisdom for the future, to be opened on New Haven’s 500th anniversary, connecting community across time. 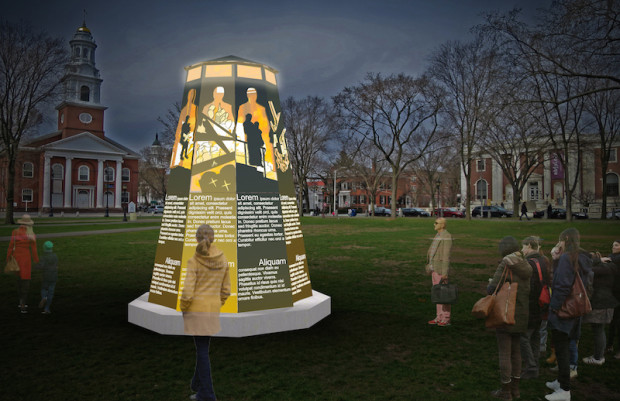 We are currently running a crowdfunding campaign to raise the money needed to create this ambitious sculpture. We’re crowdfunding because we want this project to be for the community and by the community, but we’ll need support from far and wide to make it happen. If all goes according to plan, this beacon of hope will debut during this year’s holiday season.

We frame our project not as an argument with religion, but, simply, as a gift to the community — an addition to the season’s uplifting symbolism and a nod to the nonreligious people who are becoming an ever-larger portion of the population. Our organization hopes that people of all faiths and philosophies will be able to enjoy the interactive sculpture, and see all of our shared humanity reflected in it.

We do not seek a quarrel with the legal action being taken in Shelton. Litigation to assert the constitutional rights of atheists and other religious minorities, and to protect against unwarranted entanglements between church and state, has proven a necessary and effective tactic over the years. This will probably remain true for a long time.

But as the nonreligious population grows, to the extent where we now constitute close to a quarter of the population nationally and in Connecticut, we can diversify what we bring to the public square. We can exercise our rights and express our values in more affirmative ways, too. When it comes to the holidays, we can let religion do what religion does, within reasonable limits, while we atheists, agnostics, humanists, and spiritual-but-not-religious people join them in bringing light, warmth, and good spirit to the community, albeit in our own secular ways.

Culture wars between the religious and nonreligious have been raging for decades in this country, with the Christmas/winter holiday season becoming one of the most visible venues. We are hardly so naïve as to suggest that important debates and disagreements about the place of religion in public life will vanish overnight.

We do believe, however, that another story is possible. When there’s understanding and appreciation on both sides, the secular and the religious can stand alongside one another, both literally and metaphorically, and work to make the communities we share more beautiful and inspiring in every season. With your support, we hope our Green Light Project in New Haven can stand as one example.

Want to support the Green Light Project? Today (Wednesday, May 11), donations to the campaign of $50 or more will be matched by one of YHC’s matching donors (until they hit their individual limits). Double your gift by donating today!

May 11, 2016
Don't Celebrate the End of the Religious Right Just Yet; They're Still a Powerful Force
Next Post