Pastor David Perry of New Selmont Baptist Church in Selma, Alabama has a rather unethical way of making a theological point.

He wanted to convince people to obey God no matter what the situation is, because He has dominion over us.

So he starved a dog for two days, put food in front of it, told the dog to eat the food only on command, videotaped it all, then posted it on Facebook. 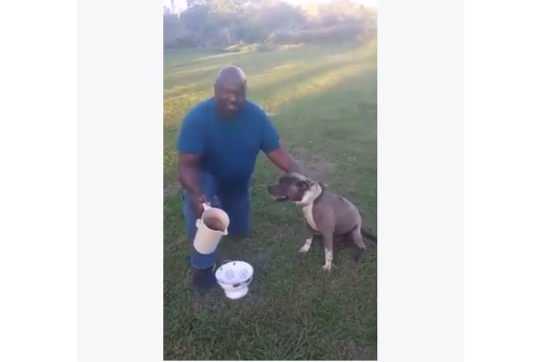 That doesn’t make me want to obey the Lord. That makes me think anyone associated with his God is a cruel, unethical asshole.

Considering thousands of people have shared this video, how many are okay with what he did?!

It’s true that dogs can go several days without eating food — I’m hoping “Cowboy” at least received water over those two days — but that’s only when we’re talking about survival. You and I could go without eating for days, too, but if someone deprived us of the opportunity to eat, we’d consider it cruel.

If there’s ethical justification for doing something like this, I’m all ears. I can’t think of any.

(Thanks to Doug for the link)

May 11, 2016
This Winter, the Yale Humanist Community Wants to Erect a Sculpture Honoring Universal Human Values
Next Post

May 11, 2016 The Arabic Translation of The God Delusion Has Reportedly Been Downloaded 10 Million Times
Browse Our Archives
What Are Your Thoughts?leave a comment