A Psychology Professor Explores the Link Between Ventriloquism and Religion May 11, 2016 Terry Firma

A Psychology Professor Explores the Link Between Ventriloquism and Religion

I know what you’re thinking: both ventriloquism and religion rely on dummies. Well, no need to be quite so snarky. Writing in the Atlantic, Michael Graziano, an associate professor of psychology and neuroscience at Princeton University, has something different in mind. He’s talking brain chemistry and consciousness — and their evolutionary progress.

Ventriloquism … pits perception against cognition. Everyone in the audience knows cognitively that there’s no mind in the puppet’s wooden head, but we still can’t help falling for the illusion.

Spirituality is another example. 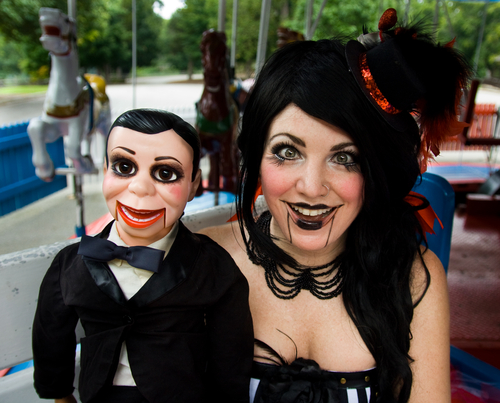 God is a social perception. Deities, angels, ghosts, devils, and presences are all consequences of the same machinery in the brain constructing models of conscious minds and attributing them to the spaces around us. People “know” these things not because they logically deduce them, but because machinery in the brain constructs the information at a level deeper than cognition, and in a way that doesn’t easily allow for doubt.

The ultimate example may be our attribution of consciousness to ourselves. The brain constructs a self-model, just as it constructs models of other minds. The self-model is more detailed, more continuous, but essentially the same. We’re just as convinced of the existence of our own inner essence as Terri Schiavo’s parents were of their daughter’s consciousness.

This reflex to attribute consciousness has radical philosophical consequences. Almost all speculation on consciousness focuses on personal consciousness — on what good my own consciousness does me. Some argue its primary function is to help integrate large amounts of information in the brain. Others argue it helps process information at greater depth and makes for more intelligent decisions. A few scholars argue that its purpose is to make life aesthetically worth living. In my own scientific publications I’ve suggested that it helps control attentional focus. All of these approaches take consciousness as a private, internal process. That perspective may be valid as far as it goes, but it’s way too limited. It ignores what may be the most important biological consequence of consciousness: its social impact.

When Graziano think of human consciousness, he sees a peacock’s tail.

All birds have tails. A tail helps to stabilize the bird during flight or maintain its balance while walking. For peacocks, however, the tail has evolved a spectacular new function: social communication.

Likewise, I think many animals use some form of consciousness as a self-model, but in the case of humans it seems to have evolved into something spectacularly public. We navigate the social world by projecting minds onto everything around us. We can’t help it. We live in a spirit world alive with perceived consciousness. It binds people together — parents with children, friends with friends. It’s the basis of our social intelligence and therefore of our success as a species.

You might expect Graziano to write a book like Consciousness and the Social Brain — and he has! — but he also uses his knowledge and perspective to pen ingenious, offbeat children’s books under the pseudonym B.B. Wurge. Talk about ventroloquism: Like Charlie McCarthy, Wurge isn’t a human, although it’s easy to mistake him for one. He is, instead, a highly intelligent orangutan who lives in an elevator in New York City, and whose works espouse “loyalty to family and friends, compassion, and an open imagination.”

Graziano says he finds being a scientist and writing imaginative fiction very similar.

To me, good science should also be imaginative and go in directions people haven’t gone before. And in science, the problem of taking a nonlinear pile of thoughts and figuring out how to arrange them in sequence is in some sense the same process as writing fiction.

Whichever of the man’s personas you gravitate to as a reader, you’re in for a trip.

May 11, 2016
Counseling Group Cancels TN Conference Due to Anti-Gay Law; Nashville Will Lose Millions in Revenue
Next Post