Last week, I posted about how the American Humanist Association’s Appignani Humanist Legal Center and the Freedom From Religion Foundation had filed a joint lawsuit against city officials in Pensacola, Florida. The basis was a government-sanctioned Christian cross that had been up in Bayview Park for about 50 years. Despite the atheists’ warnings, the officials never responded, so action was needed. 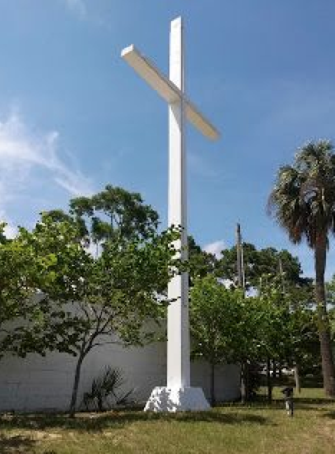 The editorial team at the Pensacola News Journal believes this is an entirely frivolous lawsuit, going after a problem that doesn’t exist. But just look at how they dismiss the idea that this symbol is promoting Christianity:

The group sent letters to Mayor Ashton Hayward last year requesting removal of the cross. It argues that the cross violates the Establishment Clause of the First Amendment. The group accuses the cross of projecting an “unconstitutional religious favoritism” as well as an “exclusionary message of government preference for Christianity over all other religions.”

What they miss is reality. The cross does none of these things. It’s simply there.

In reality, the slender white cross is a benign structure surrounded by all the diversity and vibrant activity in Bayview Park. Kayakers float at a distance from it. Joggers move past it. Dogs chase squirrels around it. Skateboarders lounge beside it. Some citizens may notice it. Most likely don’t. It’s a silent, long-present part of the landscape not unlike the many oaks and pines that stand solemnly along the Bayou Texar shoreline.

This is what Christian privilege does to people; it blinds them to how good the majority has it. It makes as much sense as men arguing sexism doesn’t exist and white people saying racism is a thing of the past. The people who tend to benefit from the status quo aren’t always going to notice how bad it is for other people under the same system.

The editorial writers don’t see this as a Christian symbol because it doesn’t stand out to them. And why would it? But I promise you if a giant Hindu or Satanic or Muslim symbol were there instead, it wouldn’t just fade into the background.

Lawsuits like this reduce the richness of constitutional philosophy to a cheap, two-dimensional plasticity that’s devoid of meaning or merit. As a result, the group’s mission is empty. It lacks any substantive goals. Even if the cross were removed, what Pensacolian would truly have more freedom afterward?

All the citizens who aren’t part of the Christian majority, that’s who. Because the city would finally be sending the message that it treats everyone equally, regardless of their religious beliefs.

The fact that the writers don’t understand all that is precisely why this lawsuit needs to be filed.

May 10, 2016
New Survey Shows Prayer is Irrelevant for Nearly Half of All Canadians
Next Post