New Survey Shows Prayer is Irrelevant for Nearly Half of All Canadians May 10, 2016 Hemant Mehta

The reports about a new survey from the Angus Reid Institute focus on how Canadians pray, though I find it much more interesting that 47% of them “hardly ever” or “never” make requests of their Supernatural Friend. 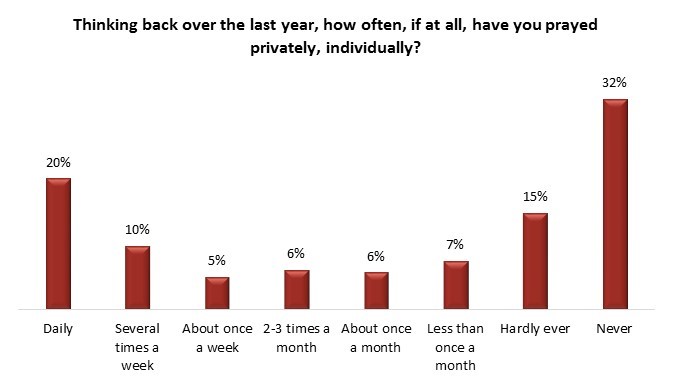 In fact, more than half of Canadians (54%) say they’ve prayed privately in the last year, though the regularity with which they do is the subject of much variation. A much smaller group of 15 per cent say they “hardly ever” pray, though they aren’t necessarily dead-set against doing so.

The remaining one-third (32%) say they are disinclined to pray privately at all — asked how often they have over the past year, they say “never”.

The survey also noted that people who prayed as children were much more likely to pray regularly as adults, which says more to me about the difficulty of breaking old habits than the power of the divine.

(Thanks to @rhamiltonx for the link)

May 10, 2016 Pensacola Newspaper Says Public Cross Monument Isn't Promoting Christianity: "It’s Simply There"
Browse Our Archives
What Are Your Thoughts?leave a comment