For the past month, we’ve been following the saga of a California school district that refused to inform students about a handful of scholarships offered by atheist organizations, even though scholarships from religious groups were readily available to kids.

Now, if you’re Christian activist (and Colorado state legislator) Gordon Klingenschmitt, how do you tell people about that story without admitting atheists are being discriminated against? After all, it would poke a massive hole in the Christian Persecution bubble.

He tried and failed miserably yesterday on his “Pray In Jesus Name” show: 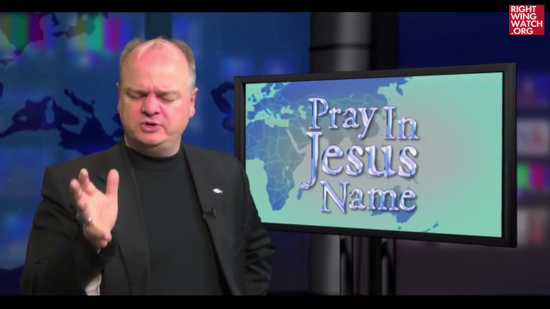 “To advertise atheist scholarships to all of the Christian students or the Jewish students or even the homosexual students,” he said, “to say that everyone should be able to get this money if you just renounce your faith, that, to me, is itself unconstitutional. There is no place for atheist recruiters to come into your schools and recruit children to violate their parent’s religion.”

Offering Christian scholarships, on the other hand, is totally acceptable because the majority of students in public school are Christians, Klingenschmitt said, and so “for an opportunity to be offered to a Christian child that, if they write an essay about God that they should get Christian scholarship money, that’s not bribery. They’re keeping their own religion … You’re reinforcing what the parents want their kid’s faith to be. This is a parental rights issue.”

Got that? Atheist scholarships are illegal and amount to bribery.

But what about atheist parents whose children were raised without religion? Doesn’t anyone care about their traditions? What happens when the shoe’s on the other foot?

Sure, some atheist parents might object to students being offered a scholarship for writing Christian essays, Klingenschmitt admitted, but that is totally different than saying “to Christian children that we’re going to bribe you with [a scholarship] if you convert and renounce your parent’s faith about how great it is to be an atheist.”

How is it different? I have no idea. But Klingenschmitt’s argument boils down to the idea that any possible benefit offered to atheists is immoral and offensive and wrong… while Christian privilege is righteous and wonderful and wholesome.

It’s amazing he can tape these episodes when his tongue is all tied up like that.

What a perfect example of the Christian Right bending a truth far enough that it fits into their narrative. Klingenschmitt can’t for the life of him just admit atheists are being denied equal treatment.

Give it another day and Todd Starnes will be whining about how this is really about atheists oppressing Christians.

(via Right Wing Watch. Thanks to Andy for the link)

May 10, 2016
Forced Apart by Christian Parents' Hatred of One Gay Son, Brothers Reunite, And It's Amazing
Next Post

May 10, 2016 Christian Activist Calls Attorney General's Pro-Transgender Rights Speech "Ignorant" and "Bigoted"
Browse Our Archives
What Are Your Thoughts?leave a comment