Yesterday, Attorney General Loretta Lynch gave an incredible speech in defense of transgender rights while announcing the government’s lawsuit against North Carolina over its discriminatory HB 2 law. A headline at Slate after the speech called Lynch the “World’s Most Powerful Advocate for Trans Rights.” 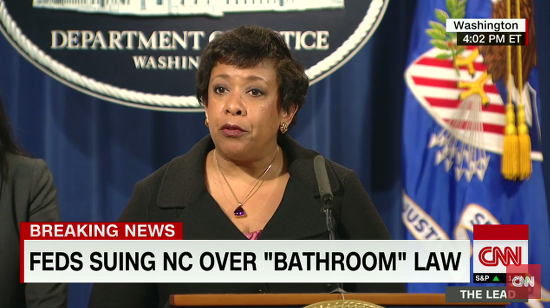 This action is about a great deal more than just bathrooms. This is about the dignity and respect we accord our fellow citizens and the laws that we, as a people and as a country, have enacted to protect them — indeed, to protect all of us. And it’s about the founding ideals that have led this country — haltingly but inexorably — in the direction of fairness, inclusion and equality for all Americans.

Let me speak now to the people of the great state, the beautiful state, my state of North Carolina. You’ve been told that this law protects vulnerable populations from harm — but that just is not the case. Instead, what this law does is inflict further indignity on a population that has already suffered far more than its fair share. This law provides no benefit to society — all it does is harm innocent Americans.

… no matter how isolated or scared you may feel today, the Department of Justice and the entire Obama Administration wants you to know that we see you; we stand with you; and we will do everything we can to protect you going forward. Please know that history is on your side. This country was founded on a promise of equal rights for all, and we have always managed to move closer to that promise, little by little, one day at a time. It may not be easy — but we’ll get there together.

Never has there been a more full-throated defense of transgender rights from a government official. (And, to state the obvious, if you don’t vote for the Democrat in the next presidential election, you won’t hear something like this again for a long time.)

But a government speech in support of dignity, tolerance, inclusion, and common decency for the most marginalized among us goes against what many conservative Christians stand for.

Laurie Higgins of the Illinois Family Institute, for example, was appalled by Lynch’s “ignorant, bigoted, and demagogic statement.” (Because in Christian Bizarro World, saying all people deserve equal rights is considered “ignorant” and “bigoted.”) She offered a giant list of problems based on her belief that gender is binary because God said so, and anything else is blasphemy.

Neither inclusivity, fairness, equality, diversity, compassion, open-mindedness, dignity, nor respect requires humans to ignore the objective, immutable sex of others…

Equality demands that we treat like things alike. It does not require us to treat unlike things as if they are alike. Men and women are substantively different as even gender-dysphoric persons and homosexuals acknowledge.

How can Lynch possibly know that those who experience gender dysphoria were “born” to lead lives pretending to be the opposite sex? How can she possibly know with certainty that when there’s mismatch between one’s objective sex and one’s feelings about his sex that the error rests with his healthy, normally functioning body?

I’m sure some of you can go through her statements, one by one, but the common thread running through her list is that she’s convinced being transgender isn’t a real thing and treating trans people like pariahs is the loving thing to do. There’s a part of me that gets where she’s coming from — we all get scared of what we don’t understand, and I imagine there aren’t many trans people in her circles. (It’s hard to fit many people inside that Christian bubble.)

The difference, however, between the people fighting for civil rights and her crowd is that only our side is willing to educate ourselves on these issues. We’ll read articles, talk to trans people, listen to what they say online — enough to come to the understanding that the traditional notion of penis/man and vagina/woman is far too simplistic.

One part of our body doesn’t dictate what toys we play with, what colors we like, what careers we pursue, what people we’re attracted to, or what gender we identify with. As a cis guy raised in a very traditional family, it took me a while to wrap my head around all that. But even if it didn’t make any sense to me, I can’t imagine going out of my way to discriminate against people who are asking for nothing more than the opportunity to relieve themselves in public like the rest of us. And not be fired because of it. And not get kicked out of their apartments.

It takes faith in God to treat trans people with that much antipathy.