A Missouri News Station is Using an Uber-Creepy Trailer to Promote a Segment on The Satanic Temple May 10, 2016 Hemant Mehta

If there’s one thing we know about The Satanic Temple, it’s that its leaders are clever. They’ll fight back against government promotions of Christianity because, you know, they’re a religion too. They’ll protest outside abortion clinics because their religion says women should control their own bodies. They’ll hold parties full of debauchery because… well, that’s just entertaining.

So if you’re a Springfield, Missouri news station doing a segment on this lighthearted group of people who don’t believe in a literal Satan, how do you get people to watch?

Simple. Add a lot of creepy music. And make sure everyone interviewed lives up to the viewers’ worst stereotypes. 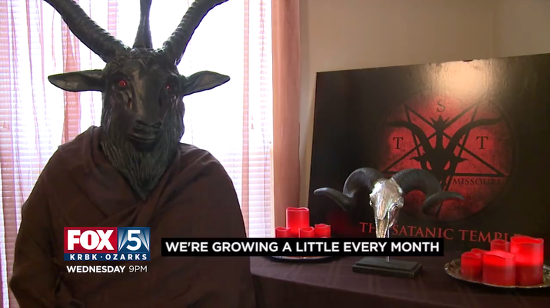 C’mon, kids! Huddle up next to the TV! This is going to be good…

The segment airs Wednesday night. I’m hoping the actual segment is less ominous than the trailer.