As powerful as science is, those who understand it know how problematic one-off experiments can be — maybe the sample size is too small or the p-value isn’t significant at all. More importantly, without replication, it’s foolish to think one published paper tells the entire truth. But the media loves a good headline, and a single result that makes for morning news show fodder may have no actual support from the greater scientific community.

That was the point of John Oliver‘s latest lengthy segment on Last Week Tonight: 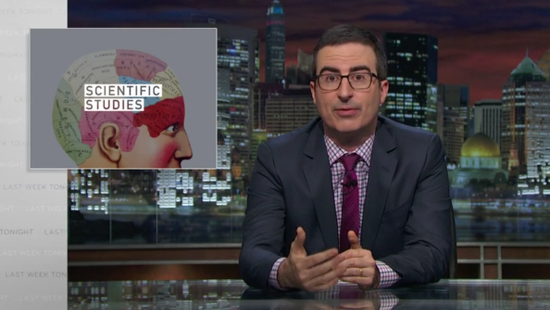 It’s a point that can’t be stressed enough. And while the segment focuses on sillier results — like the paper that says drinking champagne multiple times a week can be good for you — we know exactly how serious this can get. We’ve seen gullible, ignorant parents linking vaccines to autism because of one poorly done scientific paper that was later retracted. We’ve seen the Religious Right fight marriage equality on the basis of faulty research.

Scientific illiteracy hurts all of us — and the media does a disservice when it perpetuates these unproven ideas on the basis of one experiment. At the very least, journalists should always note important caveats — how the research was conducted, how representative and large the sample was, whether the results have been replicated anywhere else, etc.

On a brighter note, you won’t be surprised at all by my favorite line in the bit:

In science, you don’t just get to cherry pick the parts that justify what you were going to do anyway. That’s religion. You’re thinking of religion.

May 8, 2016
Angry Christian Protester Holds Up Sign on Mother's Day: "Thank Your Mom Today for Not Being Gay"
Next Post

May 9, 2016 On the Sly, Jerry Newcombe Corrects His Falsehood, But Not In the One Place Where It Matters
Browse Our Archives
What Are Your Thoughts?leave a comment