Ohio Girl Says Her Teacher Stopped Her from Reading the Bible; District Says That’s Not True May 8, 2016 Hemant Mehta

Ohio Girl Says Her Teacher Stopped Her from Reading the Bible; District Says That’s Not True

A third grader at Gorsuch West Elementary School in Lancaster, Ohio says that her substitute teacher wouldn’t let her read the Bible during independent reading time: 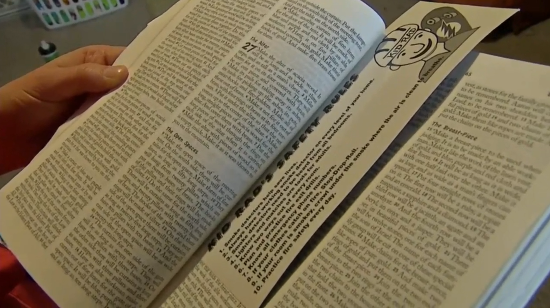 “She said, ‘Mommy, the teacher made me put my Bible away.’ And I said, ‘What do you mean she made you put your Bible away?'” Audra Palmer, the girl’s mother, said.

9-year-old Brionna said she took out her Bible during free reading time after finishing an assignment.

“The teacher come through and she was inspecting everybody’s books, and she said to put your book away and get out a different book,” Palmer said.

I think even most atheists would agree that’s an over-the-top reaction from the sub. There’s absolutely nothing legally wrong with a student reading the Bible in the classroom.

Someone call the God’s Not Dead writers. They need to get in touch with this family!

Wait! If there’s one thing I’ve learned from listening to Christian persecution purveyors in the media, it’s that they’re pathological liars, and their lies seep downward to the point where even Christians who aren’t part of the culture wars think the world is against them.

What’s the other side of this story? Because you know there’s another side to this story.

When news crews reached out to the district, the superintendent said it happened differently, stating the substitute teacher was reading to the class at the time.

“The student was asked to put her book away while the lesson was going on,” according to statement from the school. “The book happened to be the Bible. The substitute had no problem with the young lady reading the Bible earlier in the day during free reading time.“

… and there we go. They were in the middle of a lesson, when students were supposed to be paying attention to the teacher, not reading for fun. The fact that she was reading the Bible was completely irrelevant. She could have been reading Twilight and the teacher would have said the same thing.

When it comes down to it, the sub did nothing wrong, and the District said everything they needed to say. It’s not like the student got in trouble; she was merely asked to put her book away. Perhaps there was a miscommunication somewhere. But even if that’s the case, it’s absurd for the mother to run to the media as if this is a story of anti-Christian bias in the public schools.

So I guess we should all expect a Todd Starnes article very soon. He’ll herald the child as a victim who deserves all sorts of praise from the gullible Fox News crowd, despite being the student who broke the rules.

May 8, 2016
Someone Set Up a Gubernatorial Campaign Website for Disgraced Alabama Chief Justice Roy Moore
Next Post