Guess That Bible Verse: Which One Did Thieving Pastor Pick To Name His Secret Bank Account? May 7, 2016 Terry Firma

Guess That Bible Verse: Which One Did Thieving Pastor Pick To Name His Secret Bank Account?

Some members of the clergy run elaborate Ponzi schemes involving loans, or devise stock swindles, or enrich themselves with sham bond investments. Their take can be in the millions of dollars.

And then there’s the Rev. Corey Megill Brown, of Savannah, Georgia, who did nothing particularly sophisticated when he decided that “Thou shalt not steal” shouldn’t apply to him. Whenever he received a donation in the mail for his Second African Baptist Church, most of them from sick and shut-in members, he’d simply sluice the money into a personal account he’d set up for that purpose. 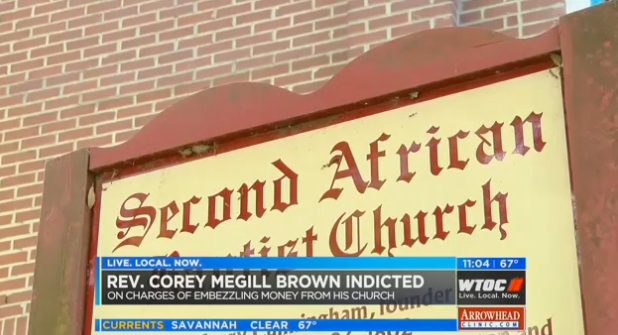 Over the course of ten years, Brown stole more than a quarter million dollars, in order to finance shopping trips for items including lingerie.

Via the Daily News:

The former pastor of a historic Savannah church stole more than $250,000 in tithes and offerings from church members over the course of a decade, funneling parishioners’ money into his personal bank account and spending it at retailers including Victoria’s Secret, according to a federal indictment.

A grand jury indicted the Rev. Corey Megill Brown on 85 counts of wire fraud and 12 counts of mail fraud, according to charges filed Tuesday in U.S. District Court.

The federal indictment against Brown says that he’d named his secret account after Romans 12, a text that tells Christians

If your gift is giving, then give generously,

Do not be overcome by evil, but overcome evil with good.

Brown, answering his calling from God, served on the city of Savannah’s ethics committee.

And I’m not even done yet.

He was also a chaplain for Metro Police, helping keep cops on the ethical straight and narrow as only a true servant of the Almighty could.

Amid swirling allegation that Brown had defrauded his flock, he was forced to resign in 2014, only to be hired as the assistant pastor at a related house of worship, First African Baptist Church. The man who hired him, the Rev. Thurmond Tillman, told a Savannah news reporter,

“They were only accusations at the time.”

And Pastor Brown’s future with the church? All Tillman could do was shrug, saying,

“His future with the church is not a thought right now because I didn’t think he’d be indicted.”

My guess is that pastor Brown is a devotee of Luke 16, in which Jesus appears to be lauding shiftiness and dishonesty. If that’s the case, how dare the federal government indict a man of God for his deeply held religious beliefs?

May 7, 2016
On Second Thought, the Washington Post Was Wrong When They Said Jamie Raskin Wasn't an Atheist
Next Post