Abbottabad, Pakistan gained notoriety for being the home of Osama bin Laden in his final years. Now, add to that ignominy the horrific murder of teenager Ambreen Riasat. 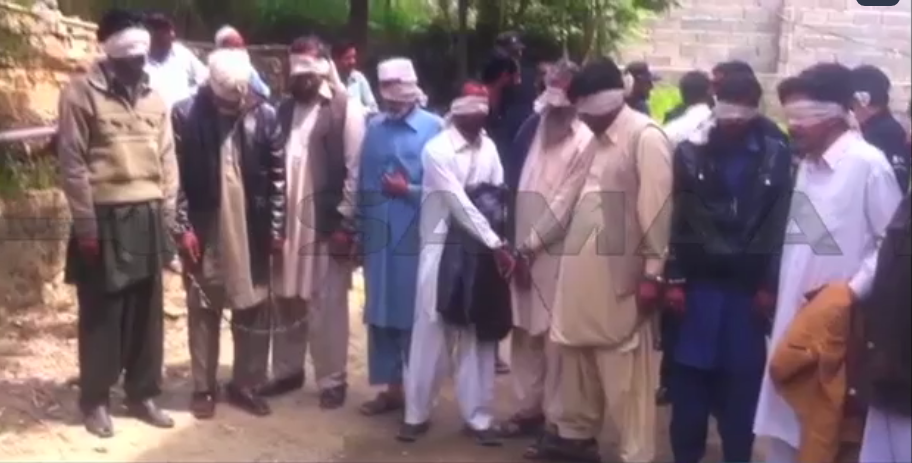 More than a dozen leaders [above] of a small village in northwestern Pakistan were arrested Thursday and charged with burning a teenage girl to death because she helped one of her friends elope, security officials said. … Khurram Rasheed, police chief for the northern district of Abbottabad, said Thursday that the body of Ambreen Riasat was found in a burned van in the tourist resort of Donga Gali on April 29, the Associated Press reported. Her exact age was in dispute [some reports I’ve seen say she was 16, TF]. A graphic photo of the teenager’s charred remains quickly circulated online. It appeared as though the girl’s arms had been bound before she was set on fire.

[T]he killing was a “pre-planned act” involving 14 village leaders. Wazir said the entire village council had sanctioned the act to send a message to other minors.“They said she must be burnt alive to make a lesson for other girls,” he said.

So what was Ambreen’s crime?

In an act of defiance against Pakistan’s strict Islamic and paternal customs, Wazir said, the victim had helped one of her friends secretly marry her boyfriend. The bride “didn’t obey her father’s will and did a love marriage at court with a guy,” he said.

The village elders investigated and rendered their verdict: the girl deserved death.

Several men then dragged the teenager out of her house and tied her into the van, Wazir said. “Despite the requests and pleas from her parents, villagers forcibly brought her out and set her afire while roping her to the seat of the vehicle,” he said.

Both the leader of the Jirga [elders council] and the father of the newlywed girl were arrested, Wazir said. A dozen other men who participated in the Jirga also were charged, he added. It was not immediately clear whether the new bride or her husband were punished.

Pakistan’s Human Rights Commission knows of 8,694 women and girls who were victims of so-called honor killings in the country between 2004 and 2015. But that involves just the victims whose fate is confirmed. Many honor killings never come to light because the whole community chooses to stay silent.

The Washington Post says that although these crimes are most common in the countryside, “honor killings still occur in Pakistan even in larger, more progressive cities.”

May 6, 2016
Franklin Graham's Bigotry Reminds Us Why Stonewall Inn Deserves To Be a National Monument
Next Post