Pat Robertson, like so many on the Christian Right, believers that treating trans people like humans is absurd. On his show yesterday, he held little back, calling the nondiscrimination measures that protect trans people unnecessary and part of a “progressive agenda” that advocates “anti-Christian bias.” 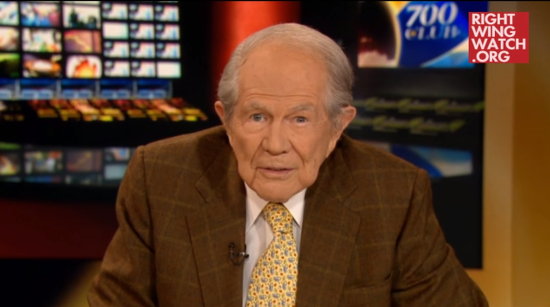 It’s the constant driving of the agenda of anti-Christian bias. We’re going to destroy any semblance of the Christian morality that exists in our country and our government is going to be at the forefront of it, that’s what you’re looking at. It’s one more attempt by the so-called progressives to destroy the Judeo-Christian fabric of America.

That so-called “Christian morality” has led to women seeking unsafe back-alley abortions, gay people unable to visit their partners in the hospital, and teens more likely to get pregnant or acquire an STI. It’s about time we stopped taking this form of “morality” seriously.

Robertson also said that the nondiscrimination measures would benefit a “voyeur who likes to look at little girls with no clothes on.” Except they wouldn’t since that’s still illegal. If he’s implying trans people are merely faking it to commit a sexual crime like that, remember that there’s no proof of that happening at all. It’s just another Christian fiction.

But he knows exactly who to blame for these problems:

The devil is obviously fighting at one particular place. It’s not that there are a lot of people being discriminated against, they aren’t.

I’m sure he doesn’t hear stories of trans discrimination among the staffers at the 700 Club. But if Robertson ever dared to step out of his bubble, he might be shocked by how so many people suffer at the hands of people who believe in his God.