Franklin Graham’s Bigotry Reminds Us Why Stonewall Inn Deserves To Be a National Monument May 6, 2016 Hemant Mehta

Christian evangelist Franklin Graham is shocked — shocked — that the Stonewall Inn, the place many call the birthplace of the modern gay rights movement, may soon become an official national monument.

On Facebook this morning, Graham called it a “monument to sin,” because two people showing their love for each other goes against everything he and his Christian cronies stand for. 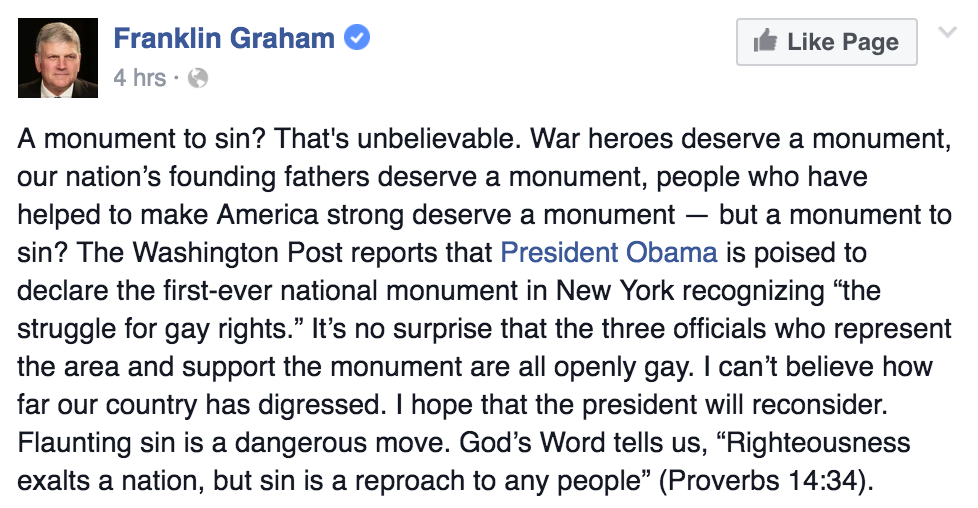 A monument to sin? That’s unbelievable. War heroes deserve a monument, our nation’s founding fathers deserve a monument, people who have helped to make America strong deserve a monument — but a monument to sin? The Washington Post reports that President Obama is poised to declare the first-ever national monument in New York recognizing “the struggle for gay rights.” It’s no surprise that the three officials who represent the area and support the monument are all openly gay. I can’t believe how far our country has digressed. I hope that the president will reconsider. Flaunting sin is a dangerous move. God’s Word tells us, “Righteousness exalts a nation, but sin is a reproach to any people” (Proverbs 14:34).

Well, lucky for him, LGBT people have been war heroes and do make America strong.

This sort of bigotry is nothing new for the son of Billy Graham, who has done everything in his power to ruin his father’s legacy.

We know exactly why Graham doesn’t want to acknowledge Stonewall or the fact that gay people have struggled for decades to obtain basic civil rights: He’s dedicated his life to preventing that from happening. He’s the reason LGBT people needed a movement at all. And an unrepentant bully isn’t likely to have a smile on his face when a monument goes up for his victims.

His Facebook comment shows everyone exactly why Stonewall, and everything that place stands for, deserves landmark status. We’re still fighting this faith-based bigotry against LGBT people. And while people like him will continue to drag their knuckles when it comes to civil rights for everyone, the rest of us want to celebrate the fact that Graham and his fellow Christian bigots are quickly descending into irrelevance.