Congratulations to London for electing the Anti-Trump.

Sadiq Khan was elected Mayor of London on Friday, making him the most powerful Muslim politician in the Western world. … Claims that Khan could not be trusted to protect London’s 8.5 million inhabitants backfired spectacularly, with senior Conservatives admitting that [their] divisive campaign drove voters away from the party. 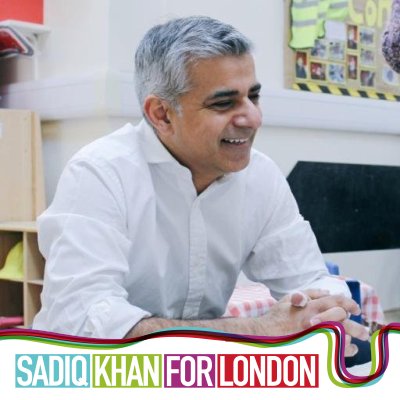 Former Conservative chairwoman Sayeeda Warsi said her party’s strategy would cause lasting damage. “Our appalling dog whistle campaign for #LondonMayor2016 lost us the election, our reputation & credibility on issues of race and religion,” she wrote on Twitter as the results came in.

The Labour Party candidate’s victory must also be an especially sour outcome for hard-right anti-immigrant groups like Britain First, some of whose exploits I wrote about earlier today. That’s because Khan is not only “just” a second-generation Briton (his father moved from Pakistan to the U.K. and drove a bus for living), but also an observant practitioner of the world’s second-largest faith.

Khan is a devout Muslim, who refrains from drinking alcohol, but he has often explained that his faith is just one facet of his character. “We all have multiple identities: I’m a Londoner, I’m British, I’m English, I’m of Asian origin, of Pakistani heritage, I’m a dad, I’m a husband, I’m a long-suffering Liverpool fan,” he said.

I’ve seen some reports that say Khan, a former human-rights lawyer, is the first Muslim to become mayor of a major European city, but that’s not quite correct. Ahmed Aboutaleb has been at the helm of Rotterdam, Europe’s biggest port city, since 2009. Khan does deserve the distinction of being the first elected Muslim mayor; Dutch mayors, by contrast, are appointed by the government.

The Washington Post says there are about one million Muslims in London — one-eighth of the city’s population — but quotes sources as saying that nowhere in Europe are Muslims a powerful enough voting bloc that they can turn an election. That is to say that Khan got there under his own steam, thanks to votes that cut across most of London’s demographic swaths.

According to the Daily Mail,

Mr. Khan scored more than a million votes on the first round alone and appeared likely to rack up the largest individual mandate in British electoral history. … [R]esults suggested he won across more of the city than previous Mayors.

The new mayor sweeps into office with a projected 10-12% lead over conservative candidate Zac Goldsmith.

May 6, 2016
Pat Robertson: Laws Protecting Trans People Are Part of an "Agenda of Anti-Christian Bias"
Next Post