I might think twice about yelling angrily at men wielding large knives and meat cleavers. But then, my name isn’t Jayda Fransen.

Fransen, a political candidate for a frightening band of underinformed fascists who call themselves Britain First, may have found her courage simply because she was accompanied by a squad of halfwit heavies. All of them invaded a halal meat facility together recently, camera operator in tow. Things soon got jawdroppingly ugly. 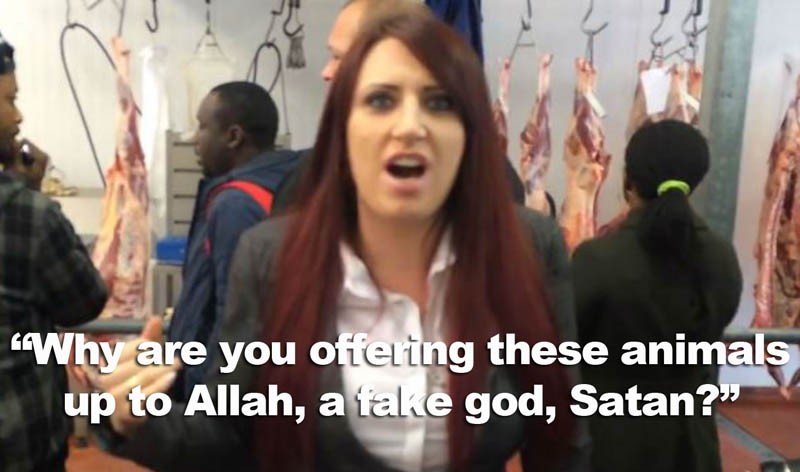 Fransen screams abuse at the hapless meat processors, whom she presumes to be Muslims.

“Don’t you realize you’re in Great Britain? In Britain, why do we have halal slaughterhouses?” …

“Why are you offering these animals up to Allah, a fake god, Satan? Do any of you have any morals?“

“Halal slaughter is barbaric. How can you live with yourselves? Look at you, every single one of you! This is a Christian country and the Bible says no Christian should eat meat offered to a false god.” …

“My grandfather fought for this country and he didn’t do that for you people to turn it into little Pakistan by you people carrying out these barbaric practices for a disgusting, vile ideology.”

In the video, members of the group also accuse halal-meat consumers of (I kid you not) “funding terrorism.”

Despite the nauseating cretinism on display, the apparent strategy behind the video is actually somewhat cunning. Few people want animals to suffer, so some level of sympathy for the animal-welfare aspect is easy to obtain. Also, the footage presents a possible conundrum for some on the left: Will liberals choose beleaguered Muslims over suffering animals, or will they support animal rights and risk betraying their multicultural values?

But the aggression and overall stupidity are too much (I hope) to convince more than a few knuckle-draggers. Fransen’s points are all terrible. I’ll do a quick take, answering her directly.

1. Why does Britain have halal slaughterhouses?

Supply and demand — basic economics. The demand comes from a group of citizens who have the same rights that you and your cronies do, and whose religio-dietary requirements with regard to meat aren’t fundamentally different from those of another religious minority: Jews. Will Britain First be going after kosher-meat merchants, too? You might want to, but I don’t think you’d dare; politically, Muslims are a much “safer” target than Jews.

2. Why are Muslims offering these animals to a false god?

Most Muslims think the Christian god is false; such are the joys of religious disagreement. More importantly, Muslims eat halal meat. It isn’t offered to God (or Satan, you simpleton) and left to rot. During Eid, they may ritually sacrifice an animal (Qurbani), but even then, they either eat the meat or give it away to a person in need.

3. Britain is a Christian country.

4. No Christian should eat meat offered to a false god.

Halal-meat consumers aren’t Christians. Anything else?

It can be. I wrote about that here. And it’s problematic that some butcher shops in Britain’s big cities advertise “unstunned” halal meat as if it’s a badge of honor. That means that the animals, fully alive and cognizant, were hung upside down, had their throats cut, and were then left to bleed out before the carving began. But more than 85 percent of halal meat in Britain comes from animals who were first stunned with electricity, reducing their suffering. That’s no different from the animals whose meat is enjoyed by Britain First members.

6. My ancestors didn’t fight for Muslims to turn this country into Little Pakistan.

I don’t know your ancestors, but there’s a pretty good chance that some of them fought on the same side as Muslims did. In fact, during World War I, some 400,000 Muslim soldiers went to war for Britain.

The word Islamophobia has been overused to the point of virtual meaninglessness, but real Islamophobes — that is, stone-cold anti-Muslim bigots — are out there for sure. The term fits the uncouth chavs and chavettes of Britain First rather nicely; stateside, it also applies to a presidential candidate or three.

On this blog, we’ll always be critical of Islam itself, just as we scrutinize Christianity and often find it wanting.

At the same time, we’ll continue to call out bigotry against religious minorities. We hope you’ll join us not just in the latter endeavor, but also in the former.