Tow Truck Driver Says God Told Him To Leave a Disabled Woman Stranded Due to Her Bumper Sticker May 5, 2016 Terry Firma

When Ken Shupe of Shupee Max Towing in South Carolina came upon the customer who had arranged to have him tow her stranded car, he suddenly felt the presence of God. And lo, God told him to leave the scene without helping the woman, because, Shupe says, her car sported a Bernie Sanders sticker.

“Something came over me, I think the Lord came to me, and He just said get in the truck and leave,” said Ken Shupe of Shupee Max Towing in Traveler’s Rest, S.C.. “And when I got in my truck, you know, I was so proud, because I felt like I finally drew a line in the sand and stood up for what I believed.” 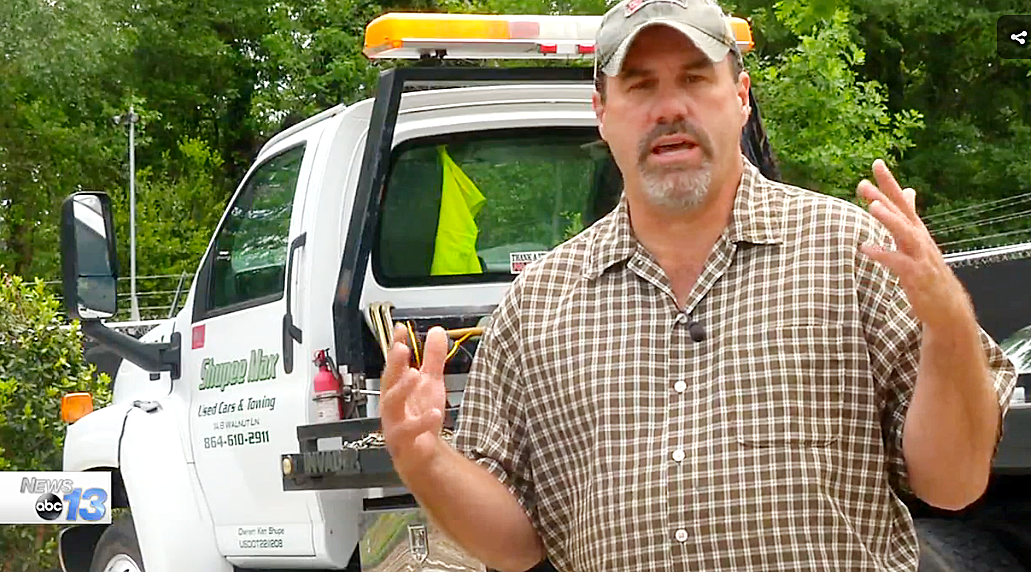 With that, Shupe and the Almighty left a disabled woman to fend for herself by the side of the Interstate. Cassy McWade, 25, says she has psoriatic arthritis, fibromyalgia, Chronic Fatigue Syndrome, and early-stage Crohns,

… which she said made sitting on the side of the road without a restroom nearby “terrifying“. She is legally disabled and says the handicapped placard was hanging on her mirror when Shupe arrived. She also says the family mechanic [who called Shupe on her behalf] informed Shupe that she was disabled.

Shupe, who supports presumptive Republican presidential candidate Donald Trump, said his decision on the side of the interstate this week was more about business than politics.

Wait — what happened to God? I thought this was about the Holy Spirit unexpectedly entering a redneck sinner?! (It’s a dirty job but someone’s gotta do it.) Well, actually, Shupe says,

Bernie Sanders supporters are socialists, and [he] says he’s had problems with two customers over the last six months who supported Bernie Sanders. He said they caused him problems over paying their bills.

McWade, who had no intention to stiff anyone (and who promptly and fully paid the tow-truck guy who eventually did show up) was distraught at having been snubbed by Shupe.

“I personally don’t believe that you have to agree on anything — just to be kind to one another,” McWade said. “I was like, what did I do to you?“

Shupe shrugs and says that he’s pleased with what he did. McWade’s disability is of no consequence to him:

“I stand by my decision, and I would do it again today if the opportunity presented itself.”

Yes: the opportunity — great word — to leave someone in need stranded. Just like the Good Samaritan in the Bible, then.

I’m glad the Good Book continues to be such a powerful beacon of morality for Christians like Ken Shupe.

May 5, 2016
Having a Child By Your Rapist Is "a Silver Lining" Provided By the Lord, Says Missouri GOP Politician
Next Post

May 5, 2016 Here's What FOX's Todd Starnes Didn't Tell You About a Christian Student Expelled For Discrimination
Browse Our Archives
What Are Your Thoughts?leave a comment