There aren’t too many issues involving religion where you’ll find Sam Harris, Reza Aslan, Maryam Namazie, and Richard Dawkins all on the same side of the aisle.

But standing in support of the atheist bloggers in Bangladesh ought to unite everyone who values free speech and spirited debate.

The Center for Inquiry organized dozens of writers and speakers to sign a letter urging the Bangladeshi government to stop blaming critics of religion for the violence that happens to them: 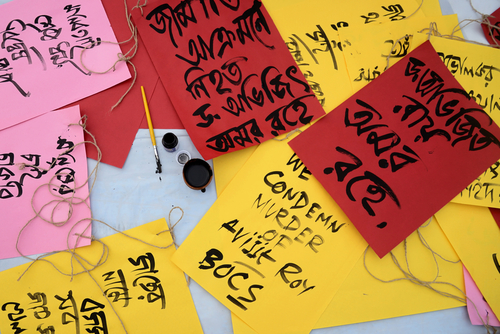 Nine people associated with secularism or secular activism have been killed since February 2015, when Avijit Roy, a Bangladeshi-American scholar and secular activist, was hacked to death by militant Islamists at a book fair in Dhaka. Last month, Bangladesh’s Prime Minister Sheikh Hasina castigated the victims for writing “filthy words.” Absolving the government of any obligation to confront the attacks, she said, “It’s not at all acceptable if anyone writes against our prophet or other religions. Why would the government take responsibility if such writings lead to any untoward incidents?”

“The world is watching in horror as innocent people are slaughtered in the streets of Bangladesh, and all eyes are now look to see how its leaders will respond,” said Michael De Dora, CFI’s main representative to the United Nations and primary author of the joint statement. “So far, that response has been appalling in its indifference to the lives and the fundamental rights of the people of Bangladesh. To even suggest that these victims brought their deaths upon themselves is to abdicate the most basic responsibilities of a government to its people, and to forsake any pretense to fostering a free, modern society.”

The joint statement, initiated by the Center for Inquiry and endorsed by a diverse group of individuals and organizations, calls upon Bangladesh to “stop citing religion as a justification to refuse the rights of certain Bangladeshis in public statements,” and to categorically condemn violent attacks against all those who exercise their right to free expression. Bangladesh is urged to bring the perpetrators to justice, and to protect the freedoms of religion, belief, and expression for all of its people, including atheists, secularists, and religious minorities.

It’s a powerful letter and readers are welcome to sign their names to it, too.

May 5, 2016
Here's What FOX's Todd Starnes Didn't Tell You About a Christian Student Expelled For Discrimination
Next Post

May 5, 2016 Atheist Sues Congress After House Chaplain Denies Him Opportunity to Deliver Invocation
Browse Our Archives
What Are Your Thoughts?leave a comment