Christian Quiverfull Leader Hosts Retreat to Arrange Marriages for Kids, All Without Their Consent May 5, 2016 Rachel Ford

Christian Quiverfull Leader Hosts Retreat to Arrange Marriages for Kids, All Without Their Consent

Vyckie Garrison has an article up at Raw Story detailing a stomach-turning scheme from Quiverfull patriarch Vaughn Ohlman. Ohlman is setting up a “Get Them Married” retreat for fathers to arrange marriages for their teenage children — without their consent. 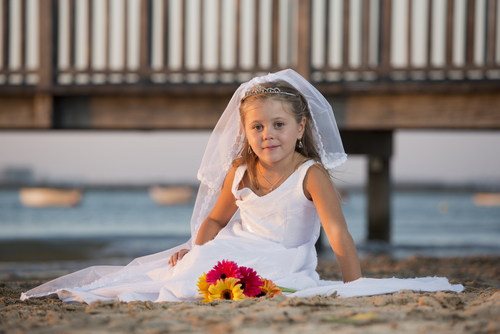 The weekend retreat, which will be held in Wichita this coming November, is “designed to bring together like-minded families (and their unmarried young men and women) who are committed to young, fruitful marriage and to help them overcome the barriers which have kept their children unmarried.”

So at what age should these children be getting married? 21 is too old, implies Ohlman, who claims the Bible recommends capping the age at 20. But beyond that, it’s a bit fuzzy. He insists — while quoting people who say 12-year-old girls are perfectly ready to be married off — that he’s not advocating child marriage or pedophilia. But his vague explanations certainly suggest otherwise:

The Bible provides many reasons for marriage, and most if not all of them demonstrate that marriage typically ought to happen in the youth (as in, before the age of 20).

We also quote some old commentators (Calvin, Gill, Luther) who assign particular age ranges to clarify what we should already know to be “youth”. (Seriously, most churches today have “youth groups”, which are for their teenage population.) And we generally agree with these men. John Calvin defines the “flower of her age” (1 Corinthians 7:36) as “from twelve to twenty years of age”. Likewise, John Gill defines it as “one of twelve years and a half old”. And Martin Luther says, “A young man should marry at the age of twenty at the latest, a young woman at fifteen to eighteen…” We do not endorse marriage at ages as young as twelve. Our position is that, for a woman:

1) The ‘youth’ ready for marriage has breasts. A woman who is to be married is one who has breasts; breasts which signal her readiness for marriage, and breasts who promise enjoyment for her husband. (We believe that ‘breasts’ here stand as a symbol for all forms of full secondary sexual characteristics.)

2) The ‘youth’ ready for marriage is ready to bear children. Unlike modern society Scripture sees the woman as a bearer, nurser, and raiser of children. The ‘young woman’ is the woman whose body is physically ready for these things, physically mature enough to handle them without damage.

3) The ‘youth’ ready for marriage is one who is ready for sexual intercourse sexually and emotionally. Her desire is for her husband, and she is ready to rejoice in him physically.

All three of the above points represent, not a certain exact age, but a level of physical and sexual maturity. Not ‘maturity’ as in ‘been there, done that’, nor even a ‘maturity’ as in ‘have been at this level for a long time’, but a point of arrival. But we are certainly in agreement with the commentators that marriage (in order to be timely and to accomplish its purposes) ought to happen before the age of twenty for almost everyone.

Depending on the Godly father figure making this determination for his daughter, though, this age could be all over the spectrum.

Let’s face it, if the idea of selling off your young daughter to a complete stranger doesn’t give you a fierce case of the heebie-jeebies, you’re already a twisted parent. (And I haven’t even mentioned the fact that “Bride prices” are also a thing at this conference — not required, but optional.)

And, really, how much of a stretch is it from, “I want to marry my 14-year-old to this virgin boy because I want her making babies as soon as possible” to “She’s only 12… eh, why not?” When some girls are hitting puberty before 10, what’s to stop a father from deciding a couple of years later that the girl is good and ready for child-bearing? Nothing, except even a shred of human decency — but the fact that a parent would consider this at all pretty much precludes that assumption.

And lest you think the child involved gets any sort of veto power, think again. You see, a good child joyfully submits to this. The girl in particular, but even the boy, doesn’t get a say in this arrangement. It’s up to his or her dad, along with the dad of the spouse.

Doesn’t a legitimate marriage require the consent of both the people marrying? Scripture speaks of the father of the son “taking a wife” for his son, and the father of the bride “giving” her to her husband (Jeremiah 29: 6; Judges 21: 7; Ezra 9:12; Nehemiah 10: 30; 1 Corinthians 7:36-38). It gives example after example of young women being given to young men, without the young woman even being consulted, and often, in some of the most Godly marriages in Scripture, the young man is not consulted.

Comparing what we see in Scripture with various commentaries as well as the culture of our world, however, we see a very interesting linguistic clash over the word “consent”. First of all, Scripture never, ever mentions the idea of “consent” in regard to marriage. Even where the character rejects the marriage or commits adultery during their betrothal, there is usually no focus at all on the person’s “consent” but on the person’s actions in response to some situation of covenant.

Some use the idea of “consent” to deny the very relevance of the action of their authorities to bind them in covenant, as if a covenant was of no effect whatsoever and all that matters is what the person themselves decide. Others consider a covenant to be something substantial but that it is not really binding until the person themselves “consents”.

In contrast, our study of Scripture has shown that the Word of God considers a covenant made by an authority to be meaningful and binding upon the those under his or her authority. Biblical consent is not the “consent” of dating or courtship. It is not a “veto” power. It does not presume to cast judgment over their father’s actions. And so, a lack of consent of the individual concerned is a choice of disobedience, a breach of a vow and of a relationship. God has designed the marriage relationship (in particular that of the virgin daughter marrying the virgin son) to be a relationship initiated by the parents, in particular the fathers, of the young couple. This is the example that God uses constantly in Scripture, and even where an example strays from this, these principles are still kept in focus.

Having a say in their own marriage is billed here as “disobedience.”

But, remember, it’s a trans woman who needs to pee that kids need to be afraid of, not twisted Christian men obsessed with controlling the genitals and reproductive capabilities of their children, no matter how old they are.

May 5, 2016
Richard Dawkins Recalls the "Passionate Hatred of Religion" of Nobel-Prize-Winning Chemist Harry Kroto
Next Post