Christian Man’s Retreat to Arrange Marriages for Kids Has Been Canceled May 5, 2016 Hemant Mehta

Earlier today, we posted about a Christian group planning on holding a retreat for parents who wanted to marry off their children. Making matters worse, the host of the event, Vaughn Ohlman, suggested that the kids could be as young as their early teens.

As of tonight, however, that event has been canceled.

The retreat — and that word seems particularly apt here — was slated to take place at Camp Hiawatha in Wichita, Kansas, a campground owned by the Salvation Army. The group denied any involvement with Ohlman’s organization Let Them Marry once the story went viral online: 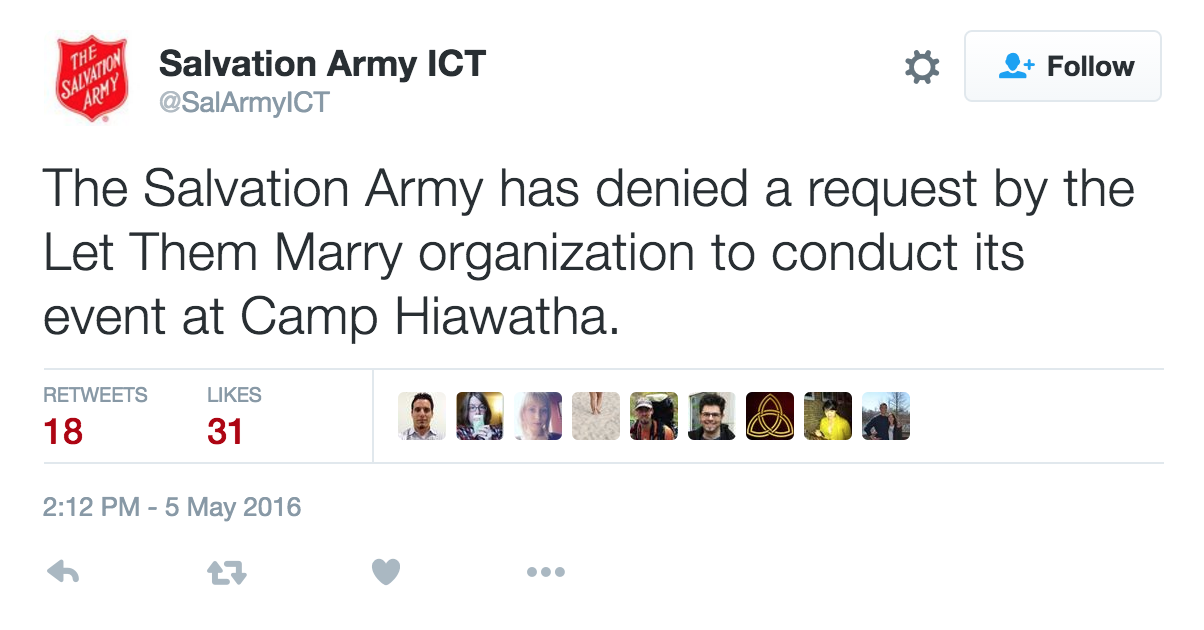 The Salvation Army has denied a request by the Let Them Marry organization to conduct its event at Camp Hiawatha.

Our decision is based upon our long-standing concern for the welfare of children. At The Salvation Army, we work every single day to provide a safe, caring place for children, many of whom have been left vulnerable due to the actions of adults.

We remain steadfastly focused on our mission of advocating for and protecting children.

That sounds great. But why did they say yes to the event in the first place? Why was the Salvation Army responding to internet outrage and not the despicable nature of the group?

Actually, the Salvation Army explained in a comment, the event was never approved at all. Ohlman requested it and the SA schedulers put the dates on hold (as they would with anyone), but after researching the nature of the event, they lifted the hold and rejected Ohlman’s request.

It must have been news to Ohlman, who was proceeding full speed ahead with the event before today. But even that came to a halt tonight. If you visit his website now, there’s a brief disclaimer on the site that says the retreat is cancelled:

There’s also a brief message at the top of the screen that is meant as a response to all the things people are saying about his organization:

Note: Contrary to vicious internet rumors we do not support or in any way condone child sexual activity of any sort, child marriage, or any other illegal activity. Nor do we support or condone forced marriages. We believe that parents should NOT seek a spouse for a child where that child has not actively sought for the parents to do so.

If you parse the words, Ohlman doesn’t deny his three-prong checklist for how old a young woman should be in order to get married off by her father: (1) She needs boobs, (2) she needs to be able to have children, and (3) she needs to be mature enough to handle sex.

Of course, all three could technically apply to women who are just entering or about-to-enter their teenage years. If that note was supposed to make Ohlman seem less creepy, it failed miserably. He could easily have said we don’t arrange marriages for anyone under the age of 18. He didn’t. I believe there’s a reason for that.

Hats off to Vyckie Garrison for bringing this story to everyone’s attention and staying on top of it until the retreat got canceled.

May 5, 2016
Beyond Solace, a Great-Grandmother Commemorates a Dead Baby By Upbraiding God
Next Post

May 6, 2016 Atheist Activist Alix Jules Talks About Race, Religion, and Politics
Browse Our Archives
What Are Your Thoughts?leave a comment