Skidmark Jesus Depicts a Celebrated Atheist Who Finds Christ… In His Underwear May 4, 2016 Terry Firma

If you have Showtime on demand, don’t miss the first and only season of Happyish, a smart U.S. comedy with the British funnyman Steve Coogan, who’s long been a favorite of mine. The series is also available on iTunes.

Coogan plays Thom Payne, a disillusioned middle-aged advertising executive. Trying to stay sane in a world he helped create but no longer understands, Payne often dreams up amusing stories and movies in his head. The most remarkable one among those is Skidmark Jesus, which Coogan and his crew shot in beautiful black and white and interspersed through the season finale.

In five minutes total, Skidmark Jesus tells the story of the conversion of Simon Blackwall, described as “kind of a Christopher Hitchens / Richard Dawkins type.” Blackwall is a brilliant but quietly miserable man. When we meet up with him, his bowels are giving him trouble, right before a big speech. Examining his underwear after making it to a bathroom just in time (or maybe not quite), he is dumbstruck to find a shit stain that looks like a photorealistic brown-and-white portrait of the Christian Savior. 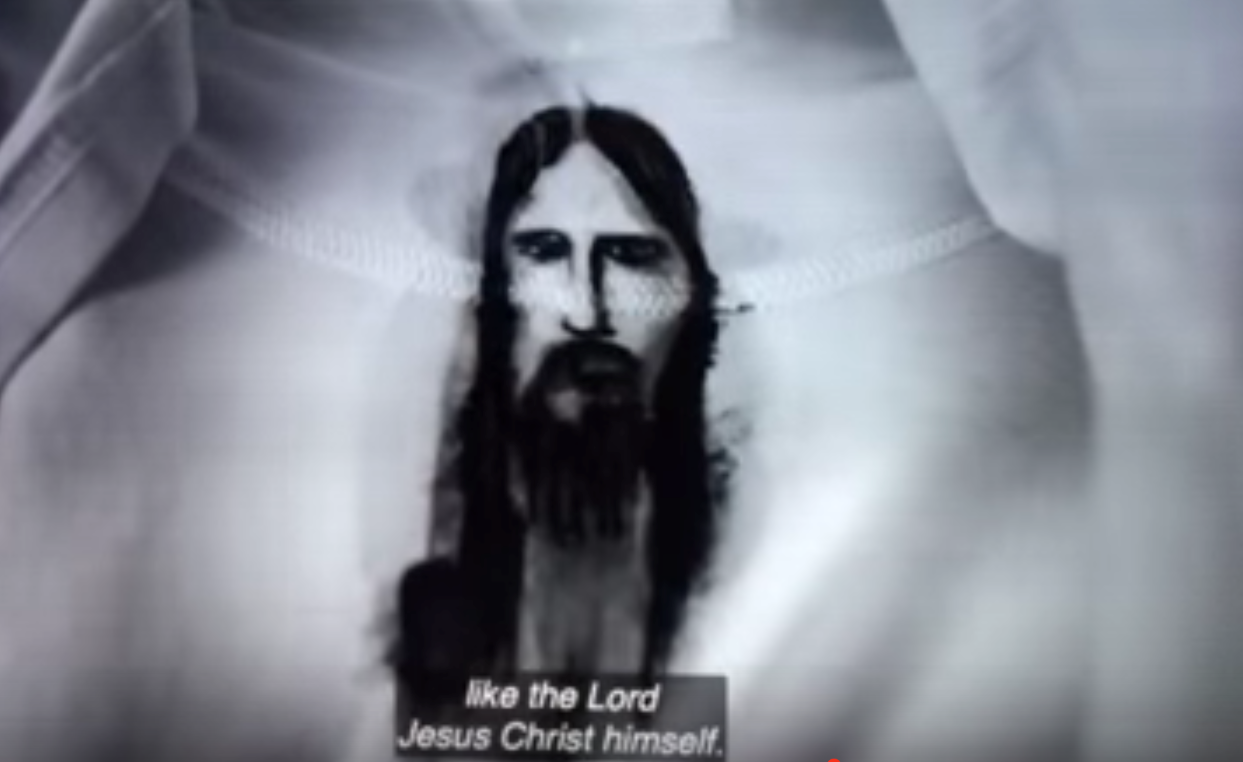 SPOILER ALERT: Next, unable to suppress the significance of this discovery — it’s a sign! — he is booed by his godless audience. A subsequent visit to a church, to share the divine shart with a priest, doesn’t end very fortuitously for Blackwall either.

Here are the three parts of Skidmark Jesus. Each one is between 90 and 120 seconds long.

What’s fascinating about this mini-trilogy, I think, is that Coogan never tips his hand. We may picture him as a foe of religion since his role in Stephen Frear‘s movie Philomena, but with Skidmark Jesus, he plays it right down the middle. Who is he mocking — Christians or atheists? Both? Where do Coogan’s sympathies ultimately lie? Damned if I know.

All of Happyish is well worth watching — not just for quirky side stories like Skidmark Jesus, but also for the lovely rapport Coogan has with Kathryn Hahn, who plays his wife. Every minute is infused with acidic jokes that lampoon Madison Avenue, Hollywood, millennials, boomers, digital culture, and, yes, religion, in ways that are free of predictability and smugness.

Oh: Savor every scene, because Showtime has regrettably decided to pull the plug on the series after just 10 episodes.

May 4, 2016 Tennessee Shell Station Advertises Hate Speech Along With Gas Prices
Browse Our Archives
What Are Your Thoughts?leave a comment