“Philly Jesus,” After Getting Booked For Trespassing and Disorderly Conduct, Is “Free At Last!” May 4, 2016 Terry Firma

“Philly Jesus,” After Getting Booked For Trespassing and Disorderly Conduct, Is “Free At Last!”

This is how bad the persecution of Christians has gotten: You can’t even drag a large cross into a store anymore and leave it blocking an aisle. And when you’re told to scram, and you demonstratively stay right where you are,  police officers will come and take you to the station.

Is nothing sacred anymore? 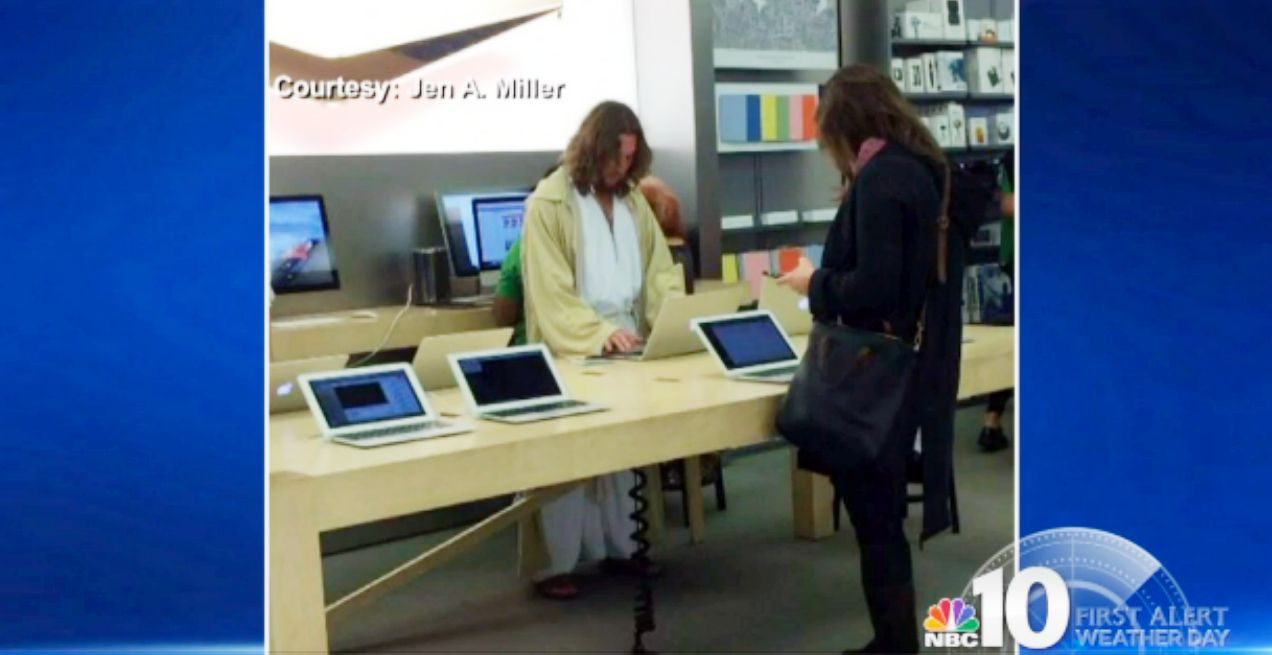 Via NBC10.com in Philadelphia:

Philly Jesus spent 12 hours behind bars after Philadelphia police say he refused to leave the Center City Apple Store after he says he was discriminated against.

Philly Jesus, born Michael Grant, was inside the Apple Store on 1607 Walnut Street around 6:15 p.m. Monday. Investigators said employees asked him to remove a cross he had taken inside the store because it was blocking an aisle. Grant refused to remove the cross and he was then asked to leave the store, according to police. Investigators say Grant refused to leave after being asked three times. The store manager then contacted police.

Grant, 29, was arrested and charged with defiant trespassing and disorderly conduct.

After spending a night in jail, he took to Twitter and invoked the Rev. Martin Luther King.

He followed that up with

“This country was built on freedom of religion and I can go into a public place and be dressed as whoever I want and express myself however I want. The same way an African-American human being in the 1960s would be singled out in a white only store and asked to leave, I ‘Philly Jesus’ was singled out in the Apple Store because of my visual faith I portray — dressing up like Jesus holding my cross. An Apple employee, who was offended by my appearance and by my cross, asked me to leave because of who I am and what I represent — because of my faith.”

Behind bars he says he was served a cheese sandwich and given some small bottles of water. “But I changed ’em into wine,” said Grant.

I can almost see this guy as a talented performance artist, ridiculing U.S. Christians’ persecution complex. Hell, the last time we saw him, he was trying to crowdfund $70 million for his personal ministry. Any Philadelphia-area readers know if he’s a poe or an actual delusional Christer?

May 4, 2016
Christian Verbally and Physically Attacks Trans Woman on NYC Train
Next Post