I know which one I’d pick if we apply Occam’s Razor. But Orthodox Christians are afraid that there’s something sinister afoot, following four blazes that gutted as many Orthodox churches in three different countries. 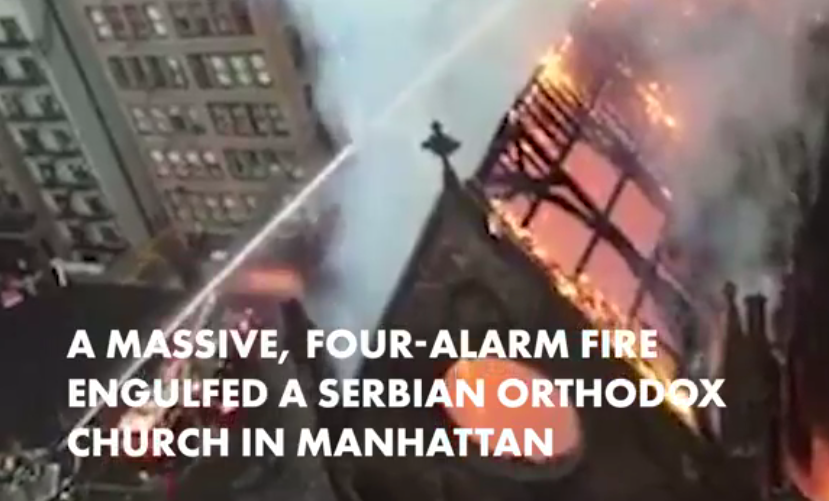 On Sunday, a four-alarm fire burned down Manhattan’s historic Serbian Orthodox Cathedral of Saint Sava on 25th Street. Investigators with the city’s Fire Department noticed nothing suspicious, but

… some in the Orthodox community fear that the blaze was part of a coordinated attack on the religion. The fire was one of four at Christian Orthodox churches around the world on Sunday, which was Easter for Orthodox Christians. The Post reports that there’s worry the fires were set in retaliation for the religion’s role in blocking the canonization of Croatian cardinal Aloysius Stepinac.

Said Dušan T. Bataković, a former Serbian ambassador and the director of the Institute for Balkan Studies in Belgrade,

“It is very strange that it happened, that the fires all took place on Easter, the greatest Christian Orthodox holiday. Some kind of terrorist action cannot be excluded.”

A second Orthodox church destroyed by fire is located in northern Russia; number three is in Sydney, Australia. An Orthodox church is Melbourne also caught fire, but the blaze was restricted to the roof.

In a followup-piece to the original report, the Post says that

Many people in the Christian Orthodox community believe the blazes at St. Sava and in Russia and Australia may have been set in retaliation for Pope Francis’ recent decision to postpone the canonization of Croatian Cardinal Aloysius Stepinac, an infamous Nazi supporter.

More about Stepinac, a [cough] exemplar of Christianity, is here.

Giving rise to speculations about arson and terrorism is the fact that all fires appear to have started some time after the conclusion of Easter services.

May 4, 2016
Donald Trump Has Won the Republican Game of Thrones
Next Post

May 4, 2016 85 Years Later, An Indian Revolutionary's Essay on Why He's An Atheist is Retold in Video
Browse Our Archives
What Are Your Thoughts?leave a comment