Donald Trump Has Won the Republican Game of Thrones May 4, 2016 Rachel Ford

Donald Trump Has Won the Republican Game of Thrones

In real-life Game of Thrones, it’s been a busy few days for the Kingdom of the States United.

In the far reaches of Indiana, the forces of the Lannister-like Evil Overlord from the Gilded Hall (who has his own Lannister-esque interest in his female offspring) vanquished the combined armies of the Lord of Ohio and the Dark Priest from Texas. It wasn’t until the Evil Overlord took the Priest’s head, though, that the Lord of Ohio surrendered, dashing the last hopes of those that resisted the reach of the Gilded Hall.

Now, one by one, the vanquished are falling in line to pledge their loyalty to the orange victor… 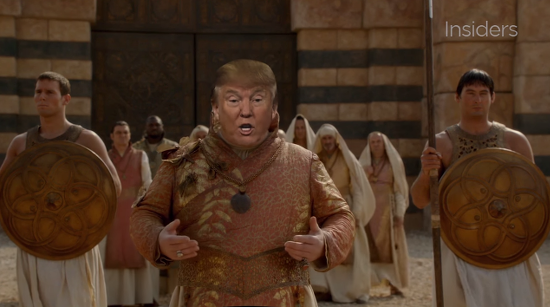 Which is to say, after months of show, the slow, inevitable primary triumph of Donald Trump has come to a surprisingly rapid conclusion. Ted Cruz admitted defeat Tuesday night, abandoning his dreams of a contested convention and saving whatever sliver of dignity he’d managed to retain throughout a campaign that seemed to pride itself on testing the bounds of believability.

Perhaps more surprisingly, the ever optimistic-bordering-on-delusional John Kasich is also throwing in the towel. I say “surprising” because Cruz’s exit really hasn’t changed Kasich’s chances very much — approximately zero doesn’t get much worse, does it? But, it seems, reality has set in. Even for Kasich.

Donald Trump was already the presumptive Republican nominee, and with no one to contest these last races, he’s the new face of the Republican Party.

And once the peels of schadenfreude-fueled laughter (“It couldn’t have happened to a more deserving party!”) has given way to terror (“But… what if he actually wins this thing? We are so screwed!”), and that in turn to more considered reflection, the implications from a secular voter’s perspective are interesting.

First, the rise of Trump demonstrates that the Religious Right isn’t as invincible as it likes to flatter itself. While Trump enjoyed the support of plenty of conservative Christian icons, the lion’s share of the Religious Right’s advocacy went to Cruz. Cruz was the one to take America back from the brink, the one who God himself had called to the job, and so on. No one elicited the religious support and self-imposed bouts of starvation quite like the man who was going to show us the face of God.

And he lost. Not to another candidate hand-picked by the fickle Lord. On the contrary, the slick, smarmy faux preacher with a thing for spanking was himself thrashed by a crude, thrice-married casino owner who offered only the most superficial nods toward religion. And not in a general election, but rather within the Republican Party itself.

For a voting bloc that sets the party’s agenda on social issues that largely drives the national conversation on women’s rights, LGBT rights, and even medicine, Donald Trump’s ascendency should be a tremendous embarrassment. It should also be a wake up call to the Republican Party that that old fallback of prioritizing the demands of religious fanatics to win elections has an expiration date after all.

That’s not to say we should underestimate the power of the Religious Right. Ted Cruz went far with their support — and even then Trump was able to siphon some of it off, away from Cruz, to bolster his own lead. Furthermore, Trump’s success doesn’t mean that the Religious Right is defanged — just that, at least on a temporary basis, Republican voters were swayed by more pressing concerns than what was happening in other people’s pants. Still, it does demonstrate an encouraging lack of influence from the more theocratic-minded members of the party.

That’s also not to say that that same wing of the party won’t have power in a Trump administration. Sure, Trump himself doesn’t seem to care about these social issues except when it’s politically advantageous to do so; but that willingness to pander will almost certainly translate into a willingness to give in to the Religious Right’s demands to keep the party’s more fanatical members complacent. As President (ugh, that’s a scary thought), he’s going to need the Cruzes of the party to support his agenda, which means the religious wing can easily exact their concessions. With the rights of millions of Americans in the balance (to say nothing of the impact of that influence on SCOTUS appointees, etc.), this is far from nothing.

So the Religious Right will certainly be able to continue influencing American politics for the worse… but its image as Kingmaker has been severely tarnished. The Orange Menace won the crown despite strong opposition from many quarters of the conservative religious community, and despite running against someone who used his extreme faith as a key selling point.

Further, while it’s gratifying to see that the two candidates overtly in favor of implementing the Religious Right’s theocratic vision are out, Trump, even if left to his own devices, is by no means a friend of religious freedom. His comments on Islam make that obvious. (And from a Humanist perspective, his comments on immigrants, abortion, etc., are mortifying).

The long and the short of it, then, is pretty much what we’ve known for a long time — the Conservative party has offered no candidate to promote the ideals of Secular Humanism. So while there’s been much activity in the race, and some possibly promising asides, Trump’s triumph has not really changed much: we’re still completely screwed if a Republican gets the White House.

May 4, 2016
Kamel Daoud: Islam-Inspired Racism in Algeria and Elsewhere Is "Unprecedented In Its Violence"
Next Post