Creationist Ken Ham: The Earth Was Created Before the Sun, and the Bible Backs Me Up May 4, 2016 Hemant Mehta

Creationist Ken Ham: The Earth Was Created Before the Sun, and the Bible Backs Me Up

On Twitter yesterday, Creationist Ken Ham explained that the Earth was created before the sun… because the Bible says so: 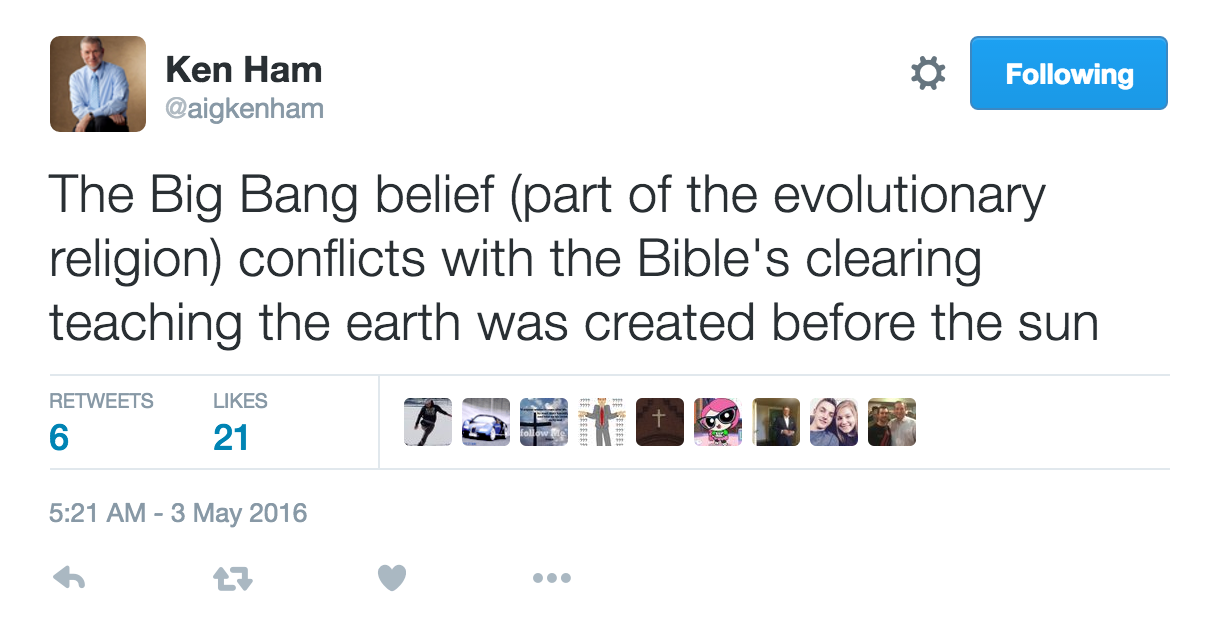 Of course, real scientists will tell you the sun was formed first, and planets like Earth came shortly afterwards through a process known as accretion, and they can point you to evidence to back that up. We can see planets being formed after their stars have been created by nature.

Ham has only the Bible, which says this on Day 3 of Creation…

And God said, “Let the water under the sky be gathered to one place, and let dry ground appear.” And it was so. God called the dry ground “land,” and the gathered waters he called “seas.” And God saw that it was good.

It’s easy to find holes in all of that.

The “greater light” (a.k.a. the sun) is a star, so why are stars referred to separately?

God says on Day 1 of Creation, “Let there be light.” Isn’t that already referring to the sun? (Some Creationists say the light in question simply wasn’t sunlight.)

And how can God create days and nights before creating the sun?

But this is the sort of nonsense you come to believe when your ministry is called “Answers in Genesis.” If Genesis is wrong, it’s blasphemous to be right. If you reflexively oppose evidence that contradicts the Bible, spouting nonsense becomes your calling card.

May 3, 2016
Incredibly, Hillary Clinton May Be the Most Religious Candidate Still in the Race for President
Next Post