As we wrote about on the site last month, Sarah Palin was part of a panel recently discussing the anti-science “documentary” Climate Hustle after the film’s premiere. (Bill Nye was also rumored to be on the panel, but he quickly denied any participation.) Palin later said, dismissively, “Bill Nye is as much a scientist as I am.” 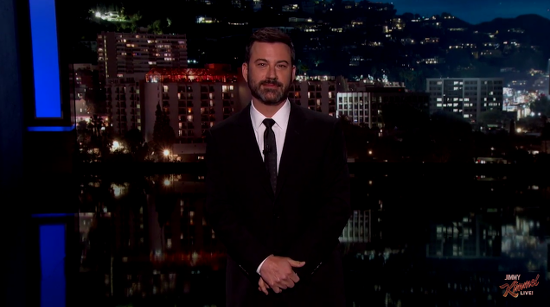 PALIN [in clip]: It’s perpetuated, it’s repeated so often, that too many people believe that, “Oh, well, I guess if 97 percent of all scientists believe that man’s activities are creating changes in the weather, who am I to question that?”

KIMMEL: Exactly. Who are you to question that? I have a theory — I think maybe Sarah Palin wants global warming; it’s cold in Alaska. It would be welcome up there. But the idea that she knows more than 97 percent of scientists is offensive and dangerous. No matter what Sarah Palin and these geniuses she surrounds herself with try to tell you, climate change is not a liberal-versus-conservative thing…

Speaking of man’s impact on the climate, Kimmel went on to say, “our politicians debate this, but our scientists don’t.”

He defended the 97% number, saying that you rarely see that much consensus: “Even one out of five dentists don’t agree on sugarless gum…”

Either you believe in science or you don’t. Why do we believe scientists when it comes to molecules and the speed of light and Cialis, but not this?

(I know, I know. You’re not supposed to “believe” in science. “Accept” would have been a better word choice. Moving on.)

The segment ended with a PSA of climate scientists telling the audience that global warming and man’s impact on it is very, very real, reminding everybody, “We’re not fucking with you.”

Kimmel has long been an advocate for science that’s under attack by conspiracy theorists. If you haven’t already, make sure you check out his bits on anti-vaccination parents.

May 3, 2016
In the Midst of the Battle Over Bathrooms, Is Target Tanking?
Next Post

May 3, 2016 Gay Imam Nur Warsame Steps Out of the Closet
Browse Our Archives
What Are Your Thoughts?leave a comment