The strange tale of the dirty, dirty “angel” has been popping up in my news feed for a couple of days. I ignored it because it seemed poorly sourced and not very believable — but now the BBC and Agence France-Presse have apparently confirmed the story.

It still stretches credulity, but then again, so does almost everything about supernatural beliefs. 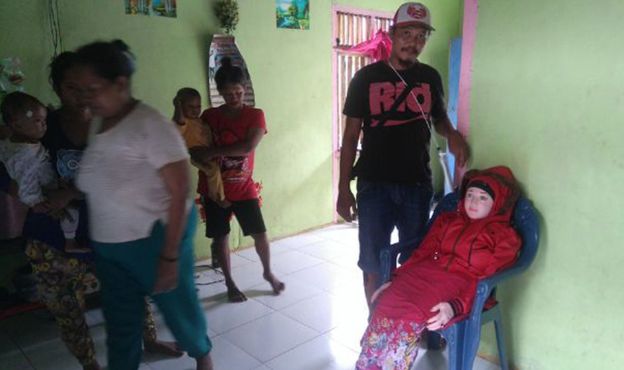 Indonesian police have confiscated a sex toy from a remote village after its inhabitants and some on social media mistook it for an “angel.”

The doll was found in March floating in the sea by a fisherman in the Banggai islands in Sulawesi province. His family took care of the doll, and pictures soon spread online along with claims it was an angel. Police investigated amid fears the rumors would cause unrest, and found it was in fact an inflatable sex doll.

Indonesian news portal Detik said photos of the doll dressed demurely and wearing a hijab spread on social media shortly after its discovery. Rumours then began to spread that it was a “bidadari” [a type of angel or spirit] along with unverified stories about how it was found “stranded and crying”, prompting the police investigation.

Strengthening the angel narrative was the fact that other, um, heavenly bodies had also just received popular attention.

Local police chief Heru Pramukarno told reporters that villagers had found the doll shortly after the rare March solar eclipse that swept across South East Asia. The timing of the discovery led some to believe the doll had a divine provenance. “They have no internet, they don’t know what a sex toy is,” the police chief was quoted as saying by AFP news agency.

Too bad that the cops confiscated the sex doll. Considering how badly superstition fucks people, it should be only fair that people get to fuck it back.