Incredibly, Hillary Clinton May Be the Most Religious Candidate Still in the Race for President May 3, 2016 Hemant Mehta

Incredibly, Hillary Clinton May Be the Most Religious Candidate Still in the Race for President

With Ted Cruz dropping out of the presidential race tonight, John Kasich still technically in the hunt but with no real path to victory, and GOP Chairman Reince Priebus dubbing Donald Trump the “presumptive” Republican nominee, an important threshold has been crossed for Secular Americans.

The Religious Right has no clear nominee, and the candidates left standing aren’t the ones who wear their faith on their sleeves.

That means we may finally have a presidential race where religion is left on the cutting room floor. We may have an election where the major candidates aren’t defined by their faith. We’re about to have a campaign where Hillary Clinton is the most religious candidate on the ballot.

Can you believe it? 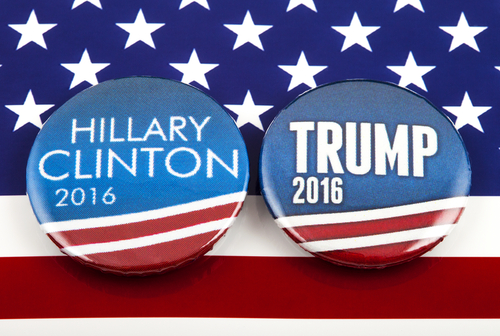 Trump may say the Bible is the greatest book ever, yet doesn’t know how to say “2 Corinthians.” He doesn’t have a favorite passage. He can’t decide what he likes more: The Old Testament or the part with Jesus in it. He doesn’t ask for forgiveness because he thinks he can do no wrong. He picks fights with the goddamn Pope. He doesn’t want to reach out to the downtrodden; he wants to kick them out of the country.

If he’s trying to play the part of a Christian, he’s a horrible actor. For him, religion is just a tool to help get him elected. He may say he’s religious, but no one’s seriously falling for it.

What about Bernie Sanders? He calls himself Jewish, but it’s a very secular kind of Judaism.

When asked by comedian Jimmy Kimmel about his faith last year, Sanders simply said, “I am who I am.” In January, he told the Washington Post, “I am not actively involved with organized religion.”

During a televised Town Hall meeting on CNN, he gave host Chris Cuomo perhaps the most humanistic answer yet regarding what he believes, repeating a line he said on Kimmel’s show about how we’re all intertwined:

That’s a beautiful answer, and it didn’t include the word “God” once.

And that leaves Hillary Clinton.

Do you even know what her religious label is?

A profile of her faith in the New York Times from January began this way: “Hillary Clinton is Methodist, but she rarely talks about her faith on the campaign trail.”

It’s true. Her form of Christianity is far less overt than even President Obama. In fact, according to a Pew Research Center survey from earlier this year, fewer than half of all Americans believe she’s “very” or “somewhat” religious at all. (Compare that to 59% who said the same about Obama.)

Her religion could easily be mistaken for a kind of Secular Humanism. She lives by the Golden Rule and is inspired by her faith to help other people. She’s pro-choice. She’s for gender equality. Whatever she once was, she’s actively pro-LGBT rights now. She’s also a firm supporter of church/state separation, as she said earlier this year:

To be clear, none of this is to say she isn’t religious, only that it’s the kind of religion that shouldn’t be a concern for atheists.

I would say the same about Bernie Sanders.

And, truth be told, I would say the same about Donald Trump (though we should all be concerned about him for very different reasons).

Consider that we have a President right now who seems to reference his Christianity in every major speech, a man that the Right claimed was secretly a Muslim. He won in 2012 against Mitt Romney, a candidate whose Mormon beliefs were a cause for concern among the GOP faithful. Obama won in 2008 against a ticket that included Sarah Palin, a darling of know-nothing religious conservatives whose Christian beliefs were (and still are) downright scary to everyone else. And all of that comes after eight years of George W. Bush, whose own faith led to so many disastrous policy decisions.

I know it’s still early and we don’t know who the running mates will be in this election. (Sorry, Carly Fiorina.) But it certainly appears to be the case that the religious beliefs of the candidates will not play a significant role in the race from this point forward. We’ll absolutely be talking about religious issues — LGBT rights, “religious freedom” laws, abortion, etc. — but it’d be disingenuous to say the candidates’ faith is the driving force for their positions here.

Meanwhile, all the Republicans who said God wanted them to run for President have now dropped out of the race.

God has spoken, and He clearly wants nothing to do with this election.

(Image via chrisdorney / Shutterstock.com. Portions of this article were published earlier)

May 3, 2016
Divorce is Even Harder on the Kids When One Parent is Shunned By the Other's Religious Community
Next Post