Andrew Seidel, blogging at Freethought Now, found that between them, the House and Senate Chaplains receive a really nice chunk of change. 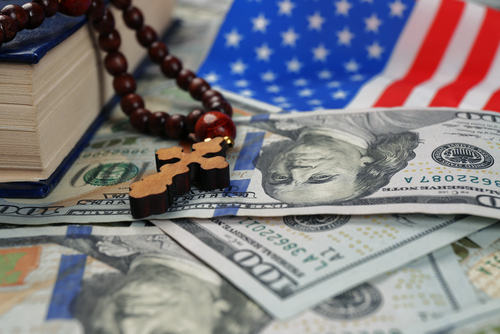 Since 2000, your Congress has spent more than $10 million on prayers, the vast majority of which are to the Christian god (more than 96% of prayers in the House were Christian).

The Senate Chaplain’s Office has a budget of $436,886 this year. The House Chaplain’s budget is similar, but it was not a line item — it was lumped in with $24,980,898 for the “salaries and expenses of the Office of the Clerk, including the positions of the Chaplain and the Historian.” However, the Senate chaplain has three staffers — a director of communications, a chief of staff, and an assistant — while the House Chaplain only has two staffers — an assistant and a liaison. The salaries alone for the three in the House chaplain’s office top $345,000 according to InsideGov. Add expenses and Congress is spending $800,000 every year on its opening prayers.

For the U.S. government, $800,000 a year is the equivalent of a penny in the couch cushions to you and me — next to nothing. But in the real world, where the rest of us live, that’s real dough that could have remained in taxpayers’ pockets, or spent on something that actually affects something or feeds someone. Using the money to buy donuts and coffee for the Capitol’s janitorial staff, or giving all the clerks and office assistants an Amazon gift card, would already be a better use for 800 grand. And that, at least, wouldn’t be such a nose-thumbing violation of the Establishment Clause.

I do, however, have a couple of nits to pick with Seidel’s article.

First of all, he makes it sound like all the chaplains do is lead a prayer at the start of every legislative day. In fact, they run a “ministry of outreach” that includes things like receiving religious leaders and offering spiritual counsel to members of Congress and their families.

… the [House] Chaplain provides pastoral counseling to the House community, coordinates the scheduling of guest chaplains, and arranges memorial services for the House and its staff. In the past, Chaplains have performed marriage and funeral ceremonies for House members.

It’s virtually the same for the Senate Chaplain. There’s a lot more to the position than saying a prayer once a day. It’s still a bullshit job that should have no place in a constitutionally secular country, but we ought to at least acknowledge the simple facts regarding these people’s job descriptions.

The other, related instance where Seidel goes off the rhetorical rails is that he calculates the Senate and House chaplains’ hourly wages by dividing their admittedly pretty sweet paychecks ($155,500 and $172,500 in 2011, respectively) not by the total number of hours they worked — presumably, that would be about 1,900-2,000 hours a year — but by the time they spent giving actual invocations.

That’s just not a realistic or fair way of looking at it. If Seidel examined my income (I’m a photographer) using the same method, he’d probably claim that I make over ten million dollars an hour. That’s because I delivered roughly 7,500 final images to clients last year, grossing about $105,000 — and all those images took me only 37.5 seconds to make, total, assuming an average shutter speed of 1/200th of a second. How many times the federal minimum is an hourly wage of ten million bucks? Are you outraged yet?

Let’s come back down to Earth and agree that the two chaplains’ jobs, at any government-provided salary, are constitutionally problematic, even ridiculous. No tendentious calculator acrobatics should be required to reach that conclusion.

May 3, 2016
Saskatchewan Premier Says Government's Christian Prayers Will Continue Despite Petition
Next Post

May 3, 2016 Who Would Oppose Eliminating the Statute of Limitations on Child Sex Abuse Cases? Catholics.
Browse Our Archives
What Are Your Thoughts?leave a comment